Lewis Hamilton says he and Mercedes are as motivated as ever this year to continue their success.

Mercedes' new car had its first run at a private test at Silverstone on Friday.

Hamilton's Finnish team-mate Valtteri Bottas will drive the car in the morning before the Briton, 35, takes over in the afternoon.

"It is my eighth year with the team and the buzz is the same every year," said six-time world champion Hamilton.

"They couldn't be more excited or driven. That is the most impressive thing."

After taking over from Bottas in the new W11 in the afternoon, Hamilton said it "felt great".

"I've been doing this a long time but each time you get in, the excitement is exactly the same if not more," he added.

"It all ran smoothly and we won't really know until we get to testing just how good a machine it is in terms of how big an improvement it is, but it didn't feel like a big departure from where we were in (the last race in) Abu Dhabi so that's a good start."

Hamilton said there were no signs of complacency of over-confidence from the team as they embarked on what could be their seventh consecutive championship winning year.

"It would be easy to be laid back," he said. "But everyone is super-focused, excited and revamped and reinvigorated for the challenges ahead."

The team are permitted to do a maximum of 100 kilometres on Friday before shipping the car to Spain for the start of pre-season testing on 19 February.

Hamilton added: "At this time of year you don't really feel the pressure; it is about enjoying the moment.

"The guys have worked so hard to put the car together and only two of us get to drive it. It is a real privilege to have that position."

Hamilton is targeting a seventh world title this year, which would equal the all-time record of Michael Schumacher.

And if he keeps up his win average of the past six years, he will surpass the German's other record of 91 Grand Prix victories.

Hamilton shrugged off comments from Red Bull's Max Verstappen, who said at a media event last week he could beat the Briton if he had the right car, adding: "Lewis is very good. He is definitely one of the best out there but he is not God. Maybe God is with him, but he is not God."

Hamilton said: "I find it funny seeing that. I have just always known to do my talking on the track. I tend to see that as a sign of weakness."

Mercedes team boss Toto Wolff said the champions were taking nothing for granted before the new season.

"Success is taking each day at a time," Wolff said. "Today, success would be we have a good shakedown, clock the mileage, get the filming done and then go to Barcelona, get the work done, collect the data and go in good shape to Melbourne [for the season's opening grand prix]."

The new car is an evolution of last year's dominant W10 with refinements throughout.

The rear bodywork is noticeably more tightly packaged for better airflow and there is the usual complexity of airflow shapers behind the front wheels.

Mercedes technical director James Allison said Mercedes had worked hard on improving the car's aerodynamic efficiency, resulting in a car that has a lot more downforce than last year for similar levels of drag.

Allison added that among the improvements were an "adventurous rear suspension layout in order to free up aerodynamic development opportunity".

He said Mercedes were expecting the new season to start as the last ended, with Ferrari and Red Bull making it a three-way fight for race victories.

The Mercedes is expected to be the car to beat again, especially after its strong performance last year, when Red Bull and Ferrari could only manage three wins each out of 21 races. But their two rivals are hopeful of taking the fight to them. 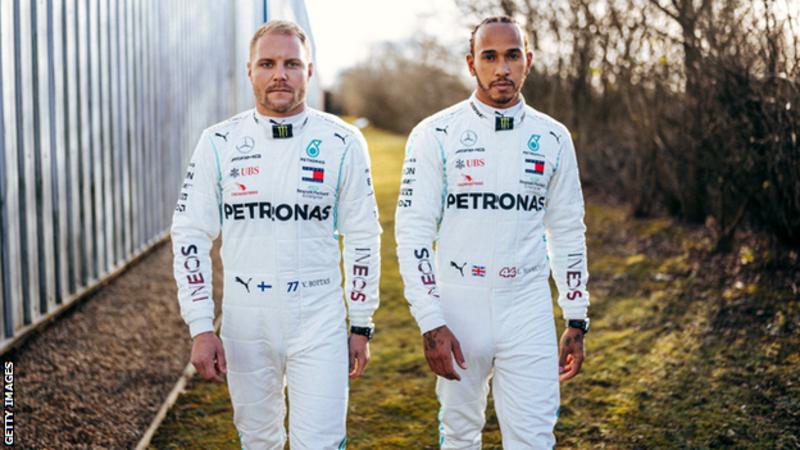 Belgian Stoffel Vandoorne, the ex-McLaren F1 driver who now races for Mercedes in Formula E, will be Mercedes' F1 reserve driver this year, replacing Esteban Ocon who has moved to Renault.

Also on Friday, Alfa Romeo are giving a first test to their new car at Ferrari's Fiorano test track.

And the former Toro Rosso team, who are being rebranded as Alpha Tauri this year, will unveil their car in Austria on Friday evening.

I told Farah to leave Salazar in 2015- Warner