With just one win from their last seven games, a humiliating cup exit, a lengthy injury list and a batch of new players who are struggling to assimilate, it's fair to suggest that Atletico Madrid are not exactly firing on all cylinders as they prepare for their Champions League meeting with Liverpool.

Why has this season, which started with such optimism, gone so wrong for Diego Simeone's team? 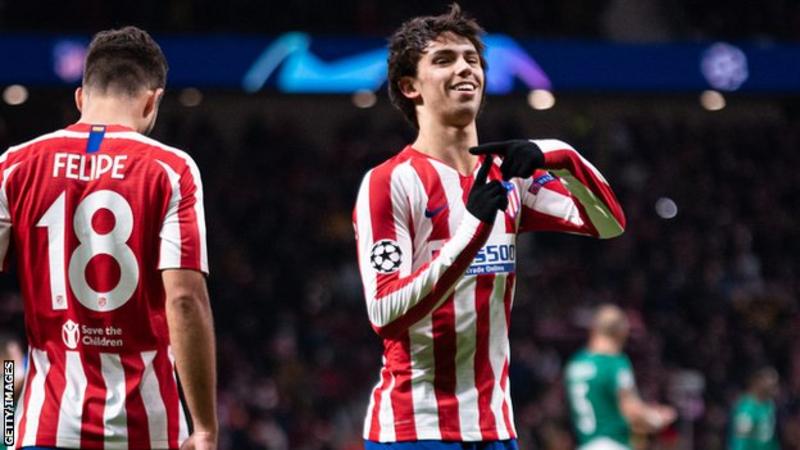 When Atletico Madrid splashed out 126m euros (£113m) last summer to make Joao Felix the third most expensive player in history, it seemed like a serious statement of intent.

And after the Portuguese youngster dazzled during pre-season, scoring once and providing two assists in a remarkable 7-3 thrashing of Real Madrid, it looked as though Atletico were poised to enter a new and exciting era of attacking football spearheaded by the world's most gifted teen.

Sadly for the Rojiblancos, the opposite has transpired. After a bright start, Felix has faded dramatically, scoring just four goals in 23 appearances before being ruled out by a hamstring injury at the end of January.

The problems encountered by Felix before his injury are a neat microcosm of the wider issues facing Atletico: how to incorporate creative football within the unimaginative framework of manager Simeone's famous defensive rigidity?

The right balance has not been struck this season, with the team's lack of attacking intent reflected in their paltry total of 25 goals from 24 league games. They have drawn nine of those encounters 0-0 or 1-1.

It's no coincidence that the only Atletico forward who could be regarded as having a good season is the versatile Argentine Angel Correa, whose qualities owe more to tenacity and grit than technical attributes.

In contrast, Felix and French winger Thomas Lemar, who are supposed to provide the unpredictable spark of ingenuity in an otherwise workmanlike team, have often looked totally lost, and the team's lack of goalscoring threat has already effectively ended their league title challenge after falling 13 points behind leaders Real Madrid.

The low point of Atletico's season - and perhaps even the whole of Simeone's eight-year reign - came in the space of five desperate days last month when they offered an alarmingly limp performance to lose 2-0 at lowly Eibar, and then had a near-full strength side knocked out of the Copa del Rey by third-tier Cultural Leonesa.

Those consecutive losses prompted unprecedented criticism towards Simeone, who stood accused of being too rigid, too dogmatic, too defensive and overall incapable of taking Atletico to the next level.

The fans have mostly kept the faith, giving Simeone loud ovations when his name was announced before recent home meetings with Leganes and Granada. But there were outbreaks of whistled complaints against the team's efforts during those two games, and the overwhelming mood among Atletico fans is that something must change if the team want to compete for major titles.

For now, that 'something' is not expected to be the departure of Simeone, whose position as iconic leader remains intact after his transformation of the club's fortunes since his arrival in December 2011.

Instead, the man expected to make way is his long-time and deeply trusted assistant German Burgos, a former Atletico goalkeeper who has been tipped to leave in the summer to follow his own coaching career and allow Atletico players to benefit from a new voice on the training ground.

It is highly noteworthy, however, that Simeone's suitability to remain in charge is even being questioned - and Real Madrid fans mockingly latched onto the new insecurity of his position by chanting "Don't go, please stay" at the opposition boss during the recent derby, which Real won 1-0.

From a ferocious warrior to a figure of fun, it's been a tough few months for Simeone.

To be fair to Atletico, they have been confronted by a long list of injury absentees this season, forcing Simeone to shuffle his pack on an almost weekly basis.

The start of 2020 has seen particular problems in attack, with injuries to Felix, Diego Costa and Alvaro Morata depleting Simeone's options and forcing the club into the desperate January re-recruitment of talented but inconsistent Belgian forward Yannick Carrasco from Chinese club Dalian Yifang.

Morata returned from injury as a substitute in Friday night's hectic 2-2 draw at Valencia, and he is expected to start Tuesday's first leg against Liverpool. Costa could also be in contention after returning to full training, and the same applies to former Tottenham right-back Kieran Trippier, so Simeone might not have the injuries excuse for much longer.

But another factor to take into account, and a point regularly made by Simeone, is that it would be fair to expect Atletico to have a transitional season after undergoing a turbulent summer, which saw key players Antoine Griezmann, Diego Godin, Juanfran, Filipe Luis, Rodri and Lucas Hernandez all depart.

On many occasions this season Atletico have fielded a back four consisting entirely of new signings, and that lack of mutual familiarity has led to a notable vulnerability against set-pieces. Nine of their 17 goals conceded in La Liga (a figure that would be much higher without the routine brilliance of goalkeeper Jan Oblak) have come from dead ball situations.

So Atletico can't score, they can't play the ball through midfield and they don't even look particularly secure at the back.

In short, they are the weakest they have been at any point during Simeone's tenure, and should be there for rampant Liverpool's taking in Tuesday's first leg at the Wanda Metropolitano.

Or will Simeone dig deep and summon another managerial masterclass?

London Marathon to be elite-only race