Motherwell: What's behind the club's poor run of form?

David Turnbull made his long-awaited Motherwell comeback on Tuesday night

Eight games without a win, 15 goals conceded in the process. Two points from 18 and the second-worst top flight record in 2020.

It hardly sounds like a run of form that would merit a team sitting third in the league, but that is where Motherwell currently find themselves.

The Fir Park club flew into the second half of the season with the same swagger they impressed with before the winter break, cruising to a 3-0 win away to Dundee in the fourth round of the Scottish Cup, and grinding out a 1-0 win at Pittodrie over European rivals Aberdeen - leaving them four points clear of Derek McInnes' side.

But the slump that's unfolded since has raised a question mark about the Lanarkshire side's credentials in their quest to bring European football back to Fir Park for the first time since 2014.

Speaking after Tuesday's 2-1 defeat at home to St Mirren, Motherwell manager Stephen Robinson lamented the decimation of the frontline that he started the season with. James Scott, Devante Cole and Christopher Long - who scored 20 goals between them - have been missed.

Scott and Cole, who have now both left the club, scored 10 goals between them in the first half of the campaign, and Robinson's January replacements have so far failed to fill the void.

And although Long remains at the club, the striker's game time has been limited this year by injury and more recently suspension after a cheap sending off against Hamilton Academical on Saturday.

Barring last week's second-half display in the Scottish Cup fifth round replay against St Mirren, which saw Robinson's men score three times in 17 minutes to claw back a 4-1 deficit, the Lanarkshire side's attacking spark has faded and they have failed to score in four of their last eight games.

Mikael Ndjoli, who was signed on loan from Bournemouth in January, is yet to start a game and has played less than 30 minutes of football for Robinson, while Tony Watt and Rolando Aarons are still getting up to speed.

As well as being praised for their free-flowing attacking style in the first half of the season, defensively Motherwell also received deserved plaudits.

With Scotland cap Declan Gallagher at the heart of the defence, Robinson's side racked up seven clean sheets in 10 games between the end of November and end of January. But, similar to their attacking spark, the resoluteness of the backline has also faltered.

The Fir Park club have conceded 15 goals in their last eight games, and only registered one clean sheet in their last seven. Now, with mainstay left-back Jake Carroll out for the rest of the season with an Achilles injury, it has forced Robinson into a reshuffle as he attempts to get things right.

As well as shipping a high volume of goals, Motherwell have also lost vital points in the league due to conceding late. Chris Kane's 93rd-minute strike gave St Johnstone a 2-1 win on February 12 and Ilkay Durmus' 87th-minute winner meant St Mirren left Fir Park with all three points on Tuesday. 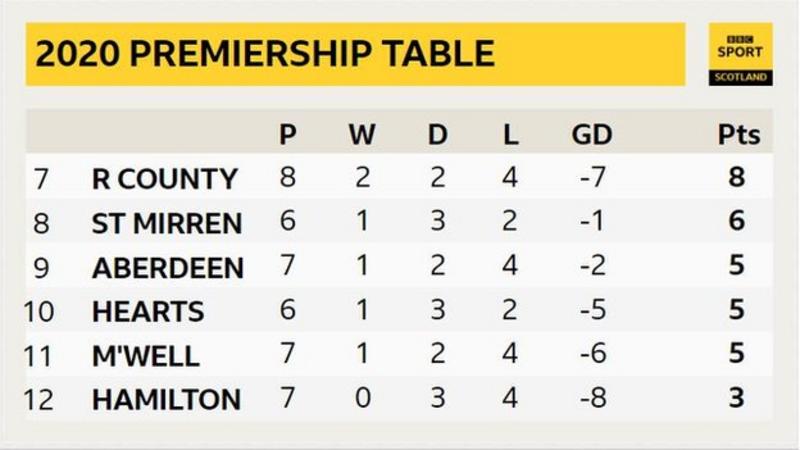 In the wake of that defeat, Robinson admitted his team could be struggling with physical and mental tiredness.

"Whether injuries have caught up with us or there is fatigue with the extra time, the psychology of losing in the last minute in a couple of games and losing on penalties, you can't feel sorry for yourself. You need to get on with it and work even harder," he said.

"We're lucky we've got points on the board already which gives us a cushion. We'll turn it around, we have to keep believing that we will. I didn't go ranting and raving in the dressing room because I think they need a bit of an arm around them to encourage them they are still a good side."

Despite their recent struggles, it's not all doom and gloom at Fir Park. The return from injury of talisman David Turnbrull is a much-needed boost for a side lacking in firepower and could be the spark to jolt them back to form.

The 20-year-old attacking midfielder made his first appearance of the season with a 20-minute cameo on Tuesday night after the knee operation that scuppered his summer move to Celtic.

Turnbull's influence at his boyhood club last season was massive and his 15 goals in 34 games earned him the Scottish Football Writers' young player of the year award among a plethora of plaudits.

Robinson will be careful not to rush the playmaker back to a starting spot too soon or overburden him with responsibility, but his mere presence will give the team a lift. And having netted 12 of his 15 goals last season in the final 17 games of the campaign, another strong finish would be just the tonic his team need.

'Cutting edge has been missing' - analysis

Former St Mirren striker Steven Thompson: "It's as if Motherwell have lost confidence, even when they've taken the lead. You look at their form over the last seven games and it's simply not good enough.

"From the position they were in, from the team we saw earlier in the season when everyone was waxing lyrical about how good they were - and rightly so - but this team has to be criticised, because for a sustained period of time it's not been good enough."

"It's a terrible run they've been on but they are still third. They are still well in the hunt for third place but there has to be an improvement. They need to get a game where they are at it for 90 minutes."

Aberdeen players spoken to by police

'Bergamo, this is for you, don't give up'

Lacazette has no plans to quit Arsenal
Next Item