Jessie Knight: The primary school teacher who beat some of the world's best

The indoor season, as big names open up on small tracks, is a chance for fans to get up close to athletics’ biggest and brightest.

The 25-year-old, a primary school teacher from Surrey, travelled up for the Glasgow Grand Prix at the city's Emirates Arena in February.

"Justyna Swiety-Ersetic is my all time favourite 400m runner. I love watching her race and anchoring the Polish relay team. So I said the week before I really hope she's in the race," Knight told BBC Sport.

She was. The thing was, so was Knight.

"It was completely overwhelming,” adds Knight, who gave up athletics to concentrate on teaching in October 2017, only to later return to the sport.

"I had rarely, if ever, been in a full stadium before. I was very, very nervous. Very starstruck."

"I was so, so nervous at the start," Knight recalls. "My legs were shaking so much that when they called us back after a false start I thought it was because I was moving in the blocks."

Instead it was a problem with the starting gun. As the officials worked to fix the faulty firearm, Knight watched as Armand Duplantis set a new pole vault world record in the field, further underlining the elite company she was keeping.

When the race finally got under way, there was a simple remedy to ward off any stage fright. Knight kept the stars out of sight and out of mind, going out hard to lead at halfway.

"I think originally the crowd probably thought: 'Good on you for giving it a good go,'" she says.

"To be honest, I was just kind of waiting for them that whole second lap. I was thinking: 'Where are they? I can't feel them yet.'

"Then on the last bend I could sense Swiety-Ersetic on my shoulder. The crowd were going mad down the home straight and I was like: 'Please hold on, please, hold on...'"

She did. Knight’s victory was the biggest of her career by far. Her winning time of 51.57 seconds makes her the fourth fastest woman in the world so far in this strangest of sporting years.

"They weren't expecting me to be there," adds Knight. "I was the only one wearing a club vest, for example. They wouldn't have known my name at all.

"Nobody really said anything else in cooldowns, apart from Swiety-Ersetic kind of patting me on the shoulder and congratulating me.

"I would probably say they were quite shocked - because I was too." 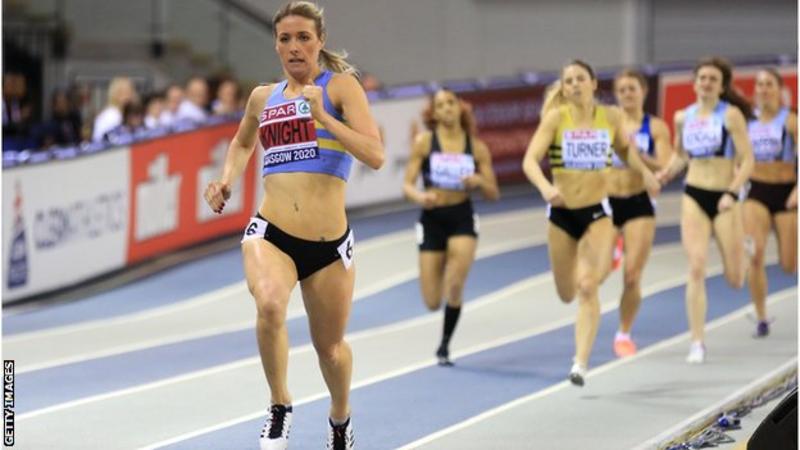 Knight powered into the lead in Glasgow and never looked back

Eight days later she was back in the classroom with her year-six pupils at Danetree School in Ewell. Since her win in Glasgow, they had enjoyed their half-term holidays and Knight had enjoyed a follow-up victory at the British Indoor Championships.

"I had a round of applause as I walked in," she recalls. "They were very excited; they thought my British Championships medal was real gold!

"I feel like they are on the journey with me. They give me lots of cute cards and messages, and the parents and school have been so supportive."

Miss Knight’s superhero-style side-hustle as a world-class athlete was very nearly squeezed out before it could start. In her first year on the job, she attempted to combine teaching and competing. After just a month, the workload proved too great.

"I actually felt quite relieved when I made that decision at first, just because the month of doing both was so tough," she says.

"I had decided teaching was my career. That was how I was going to earn money and it was time to be a grown-up."

She threw herself into teaching, marking and planning late into the night. The prospect of cold, lonely winter training sessions was easy to ignore. But come the summer, as her athlete friends on social media prepared to race once more, the track called her back.

"I suddenly realised I'd let something go that I was quite good at and I really love," she adds.

She got back in contact with coach Marina Armstrong and got back to work. She was within four hundredths of a second of making the British team for Doha last year and had hoped to secure an individual spot in the 400m hurdles - her preferred event - for the Tokyo 2020 Olympics, with perhaps a relay role on the cards.

Those plans, like her teaching life, have been scattered by the coronavirus pandemic.

But Knight knows that some of her achievements cannot be measured on the stopwatch or by weight of medals, or denied by quarantine and lockdown.

As a shy eight-year-old, her talent was spotted by her own teacher - a Mr Bosodis.

Now she is the one broadening pupils' possibilities for what they can be.

"They know when I come in really tired from a lactic session the night before," she adds.

"I make sure they know it is not just: 'Wow, Miss Knight can run really fast.' It's actually: 'Miss Knight works really hard and now it is paying off.' That is good for them to learn.

"PE for girls at this age is not always their favourite subject, but I think it has definitely made them think actually girls can do sport, because some at 10 years old don't always think that they can.

"Having a role model that is so involved with sport has definitely impacted them and made them want to do it more. I feel quite passionately about sport as well and the positive impact it had on my life, so I'm glad that I get to pass that on."

Hearts to offload Bonney, 6 others

'Bergamo, this is for you, don't give up'

Aberdeen players spoken to by police

'I'm not putting my jacket on Floyd'

France considers Tour with no spectators
Previous Item
NEXT