There’s nothing about HP’s 2019 Chromebook 14 that’s flashy or makes it stand out among the field of inexpensive Chromebooks. It’s a hefty, plasticy laptop that, at $329 as reviewed, will appeal to schools and other use cases where the sluggish AMD processor inside won’t be a major hindrance. The 14-inch, 1080p display is perfectly good for working inside Google Docs and watching YouTube videos. And HP’s sub-$400 Chromebook also offers a nice selection of ports, an adequate keyboard and trackpad, and a reassuring sense of durability. That’s about as much as you can hope for from a laptop at this price point, but with so much competition — good competition — for a couple hundred dollars more, the Chromebook 14 is a bit tough to recommend for a few reasons. 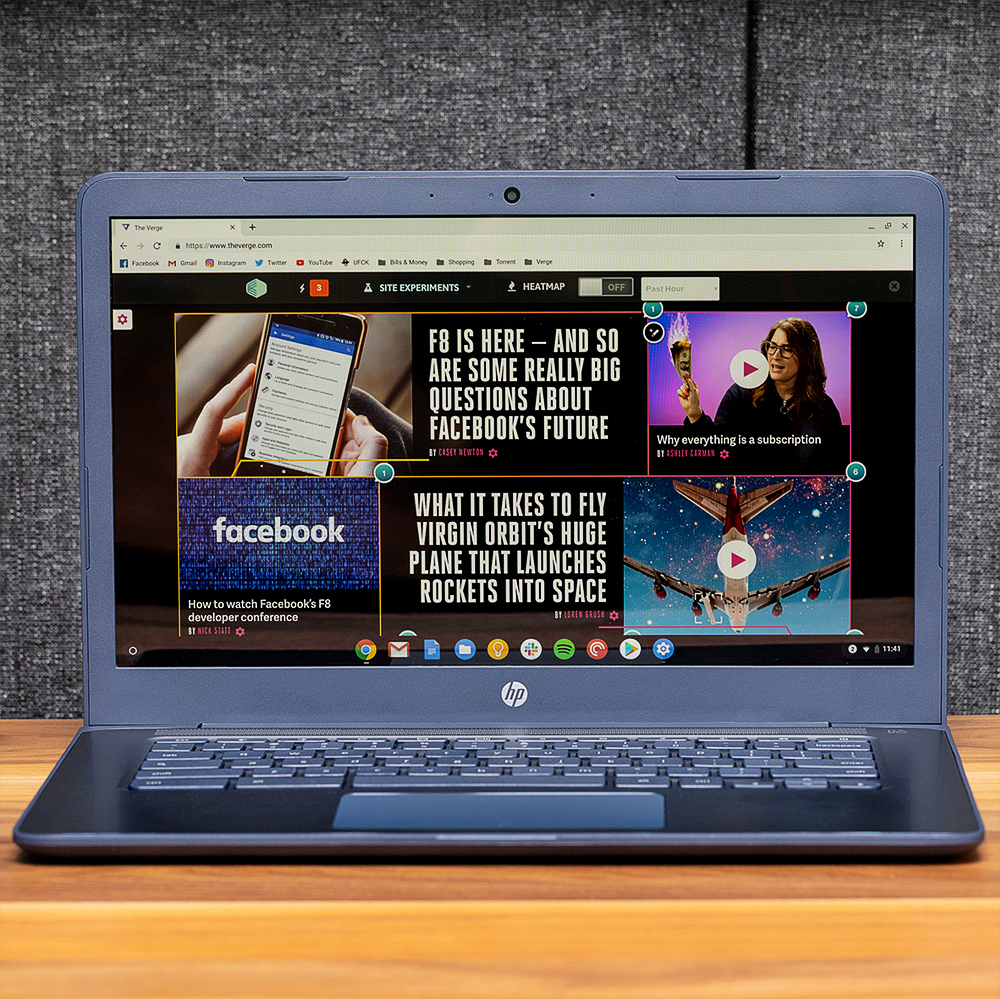 In terms of styling, it has a pleasant, textured matte plastic finish on the outer case, with a glossy circle on the top half featuring HP’s logo. This design should do a great job preventing scratches or fingerprint smudges. At 3.4 pounds, this certainly isn’t the lightest Chromebook around, nor is it particularly svelte at 0.7 inches thick. My review unit is a navy shade of blue.

When you open it up, the bezels around the display have the same texture, but the keyboard deck has a flat, smoother feel and faux aluminum look. No one’s expecting metal in a laptop this cheap, so the illusion doesn’t really pass muster. It feels fine, though, and the keys themselves are nice and clicky without feeling too loose. They’ve got a nice amount of travel, but they aren’t backlit. That’s not surprising when you consider the price and that HP probably expects this Chromebook will predominantly be used in the classroom. The touchpad works well, with smooth scrolling and accurate two-finger gesture recognition. You get a nice array of ports on the Chromebook 14’s two sides, including two USB-C (which is how you charge the laptop), two USB-A, a microSD slot, and a headphone jack. Above the keyboard and spanning its entire width is the speaker grille, and HP says Bang & Olufsen’s B&O Play brand helped optimize the laptop’s dual speakers. I’d be hard-pressed to tell you that it made any noticeable difference, as you’re still getting exactly the type of sound output you’d expect from a bottom-of-the-budget-barrel Chromebook. It’s hollow with no bass response to speak of. 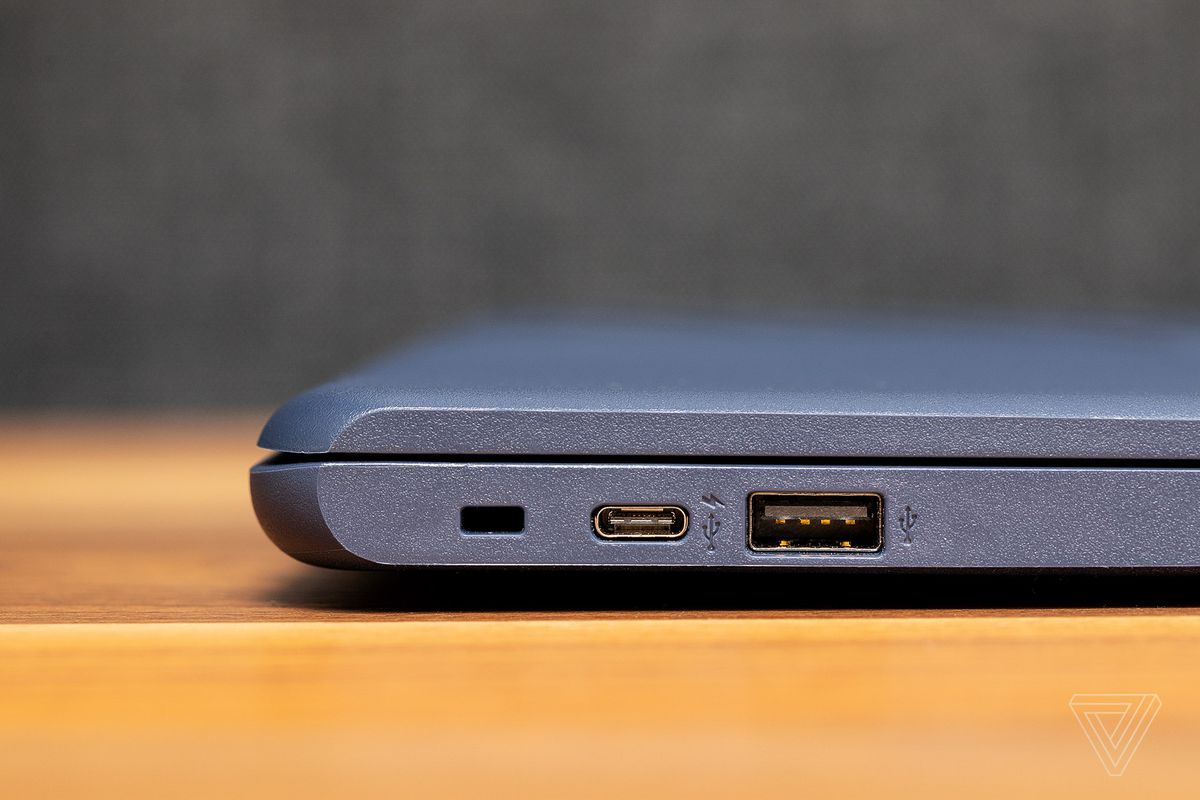 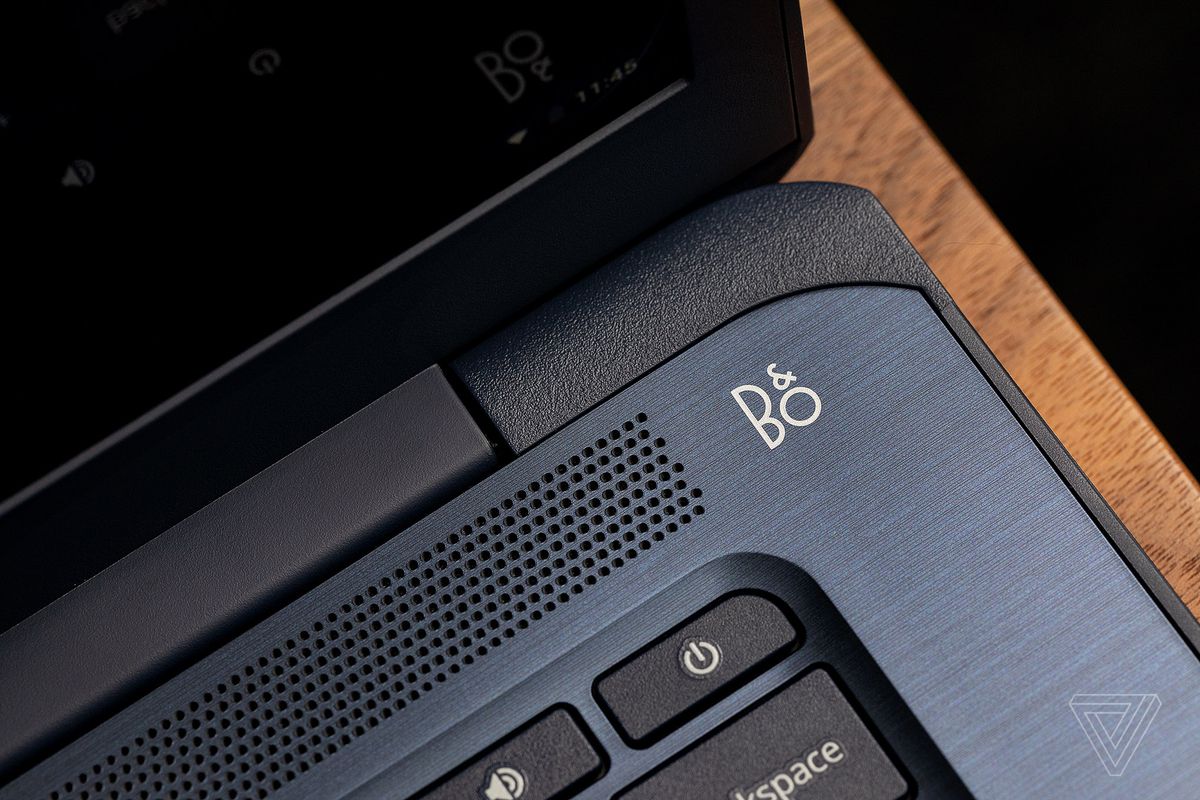 The screen is a better story, but it still comes with trade-offs. The Chromebook 14’s 1080p touchscreen display is sharp and gets fairly bright, but its colors are on the dull and muted side. When I say there are better Chromebooks out there for not much more money, color reproduction is one of the areas where you’ll see HP’s machine fail to measure up. Chrome OS responded quickly and consistently to my taps and gestures on the screen, so this hardware does the job just fine for quickly hopping around Google Docs or swiping up the app launcher. The screen’s hinge is so strong that you’ll hoist the entire laptop up if you try to open it one-handed, so you’ll definitely want to use two. Something you’ll never want to use is the webcam, which will make you look grainy and drab to anyone you’re video chatting with.

Unfortunately, as one of the first AMD-powered Chromebooks on the market, HP’s latest isn’t much of a performer. The dual-core A4-9120C processor has a clock speed of 1.6GHz and can boost up to 2.4GHz, and while it can easily hop between several open Chrome tabs at once, you’ll hit a ceiling and run into bouts of lag if you push beyond a dozen or so — especially during video playback. Don’t expect problems when working in documents or browsing the web or checking email, but if you’re doing all of that at once while playing Spotify or trying to watch Netflix, there will be slowdowns. The Chromebook 14 has 32GB of eMMC storage and 4GB of RAM, which are both par for the course at this price tier. 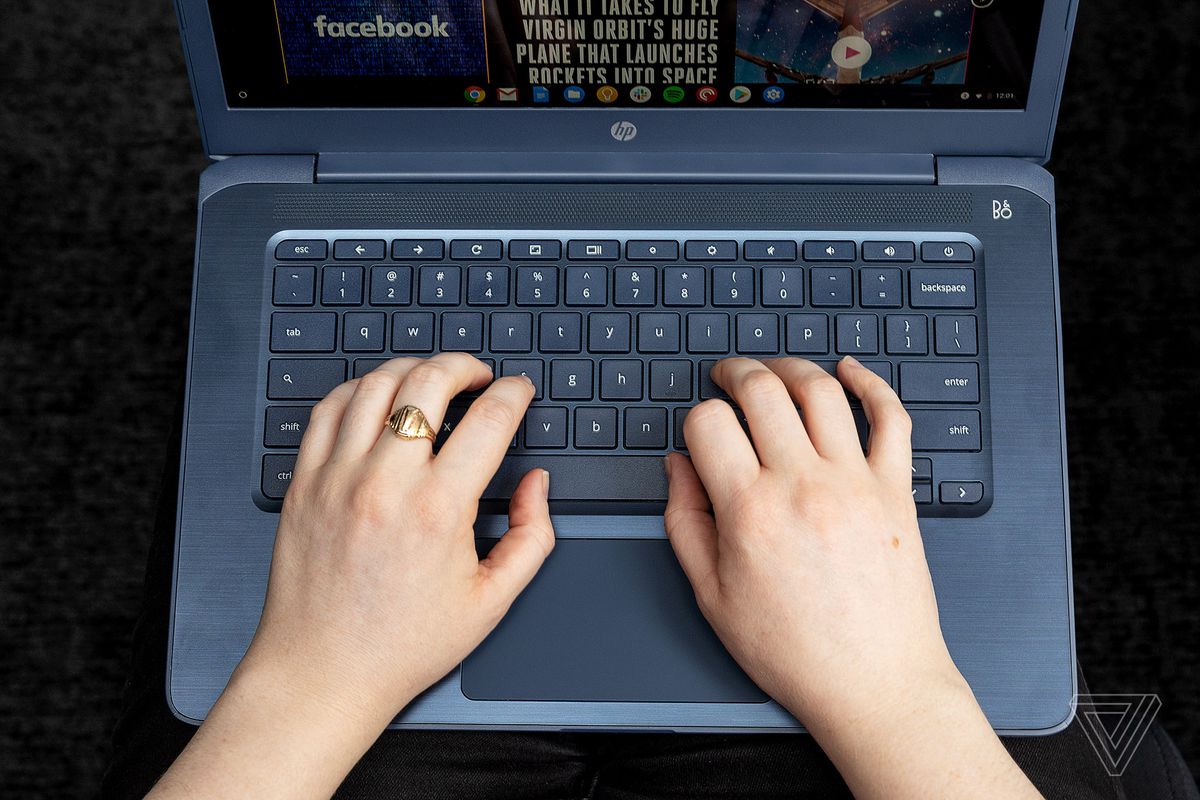 This AMD-powered Chromebook 14 isn’t cut out for playing most Android games — even the more casual ones. Alto’s Odyssey and Super Mario Run were both very choppy and clearly struggled with frame rate, despite no other apps being open in the background when I tried them. If you keep it extremely basic with something like Sonic the Hedgehog Classic, you’ll be okay, but don’t expect to be playing any of Android’s more modern titles.

Battery life was also disappointing. HP claims the laptop can hit up to nine hours, but that depends greatly on which configuration you get. The 1080p touchscreen model I tested is the biggest battery hog of them all and could never dependably get me through a typical workday. Opting for the lower-res, non-touch display (which schools might well do) can bump longevity up a fair amount, according to HP’s estimates. The move to AMD might be saving costs for HP, but it doesn’t come with battery life advantages. 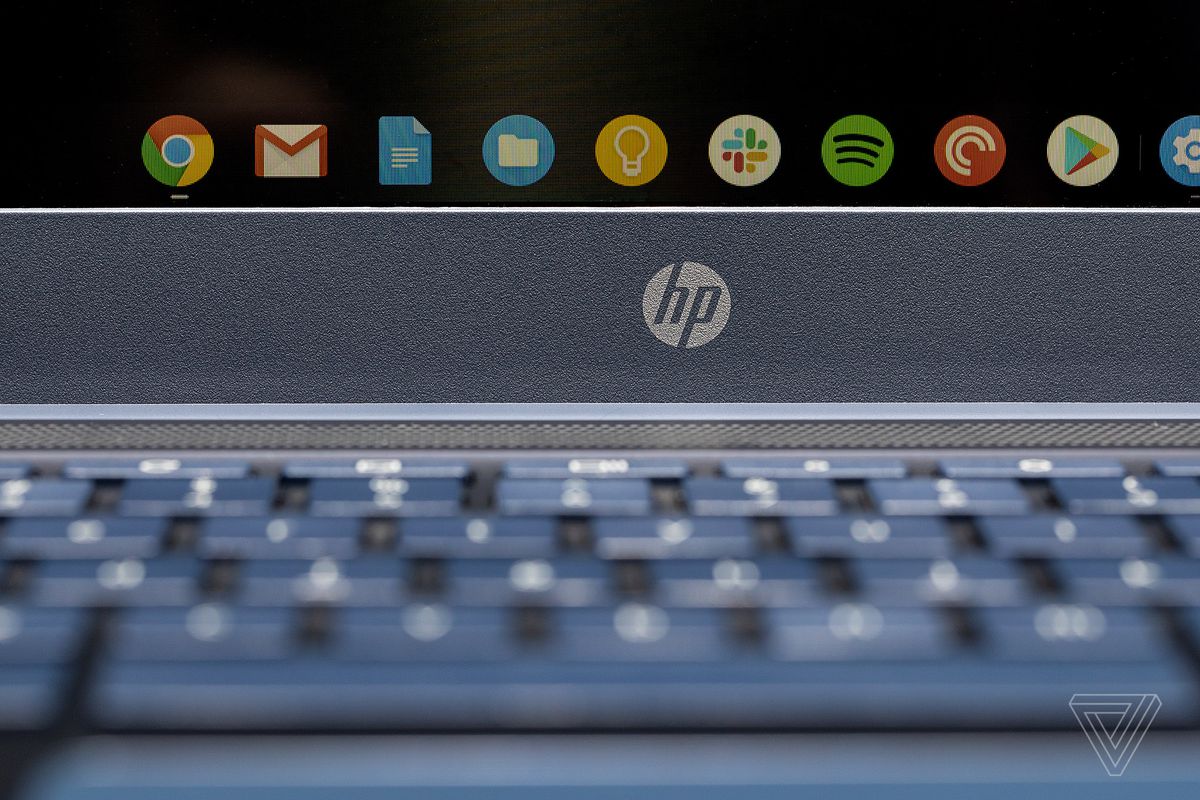 The laptop’s plastic bottom can also get uncomfortably warm when plugged into a charger or under load. I found it substantially hotter than other Chromebooks I’ve used over the last couple of years. It’s not going to burn you or anything of the sort, but there’s no getting around the fact that this thing runs toasty.

When you come back to its bargain bin price, HP’s AMD Chromebook 14 isn’t a total flop. You get a nice amount of screen real estate, a sharp display, and adequate performance for basic web browsing tasks. This laptop seems tailor-made for schools, where Chromebooks dominate all challengers. If you need a just-the-basics laptop for around the house, maybe this will catch your eye. But I’d sooner steer most consumers toward better — if pricier — choices like the Asus Chromebook Flip or Samsung Chromebook Plus. Chromebooks have undergone a lot of refining over the last few years, but the Chromebook 14 feels a little in the past. 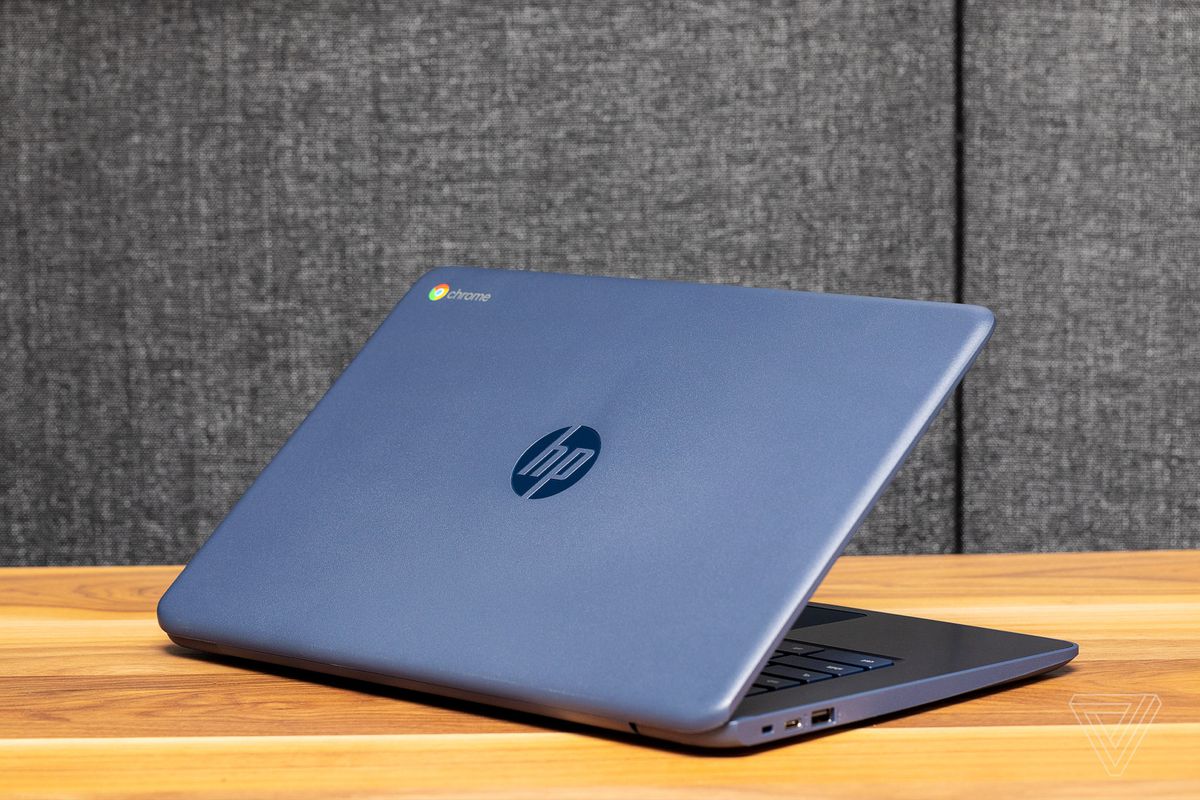 How do we stop Robocalls?
Previous Item
NEXT

Bitcoin jumps as much as 6 percent
Next Item