Google’s announcement that it was no longer able to work with Huawei is just one repercussion of the US decision to add the Chinese tech giant to its “entity list” of companies American firms cannot work with.

The true impact to Huawei may be enormous. While we often refer to the firm's devices as simply “Chinese”, the reality is much more complicated - it sources parts and expertise from all over the world. The same can be said for the likes of Apple, of course, which relies at least in part on chips created by its rival, Samsung.

To get an idea of how disruptive the US move is, let's take a look at just one component of one device: the motherboard in Huawei’s flagship smartphone, the P30 Pro.

It's a circuit board that is barely the length of a finger - but one that relies on a web of complex supply chains and sourcing to make it possible and affordable. 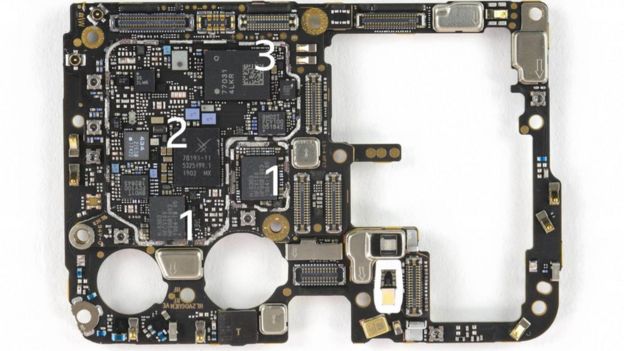 One side of the P30 Pro motherboard (picture provided by iFixIt.com)

The P30 Pro’s RF transceivers (1) and audio chip (4, below) are made by HiSilicon, a China-based company wholly owned by Huawei - but that’s where the homegrown tech ends.

The chip’s front end module (2) - which makes it able to engage with mobile network signals - is designed and manufactured by Skyworks, a semiconductor firm based in Massachusetts, USA, that falls under the US restrictions.

An additional front end module (3) to handle different radio frequencies is made by Qorvo, a semiconductor firm headquartered in Greensboro, North Carolina. It is also affected by the ban. 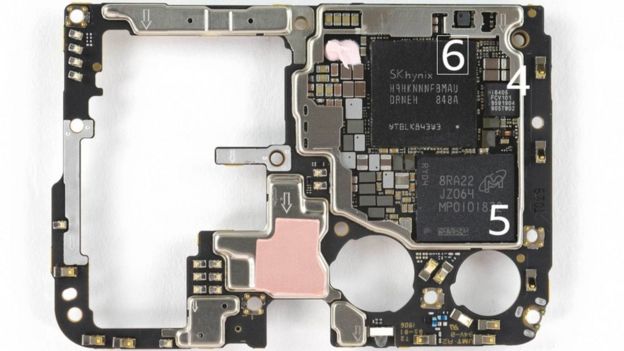 On the reverse side, the flash storage (5) is designed by Micron Technologies, a 40-year-old semiconductor specialist based in Idaho, USA. This component means the P30 has 128GB of space on which to install the phone’s software - as well as space for the phone’s user to store pictures, video and so on. According to figures, some 13% of Micron’s annual revenue comes from supplying Huawei.

And finally, you can see DRAM (6) (dynamic random access memory) designed and manufactured by SK Hynix, a South Korean firm that also supplies components to Apple and others. SK Hynix is not affected by the US restrictions, but there are diplomatic troubles here too: China has reportedly raised concerns that SK Hynix and other South Korean chipmakers are working together to drive up prices to China in order to capitalise on their expertise. The companies deny this.

This is just one motherboard, in one device.

Last year, Huawei released a list of its core suppliers and it included 33 US companies. As well as Google having to pull back on supplying its version of Android, major US technology suppliers including Xilinx, Qualcomm, Broadcom and Intel have all warned they will need to stop selling their technology to Huawei in order to comply with the ban.

NeoPhotonics, a San Jose-based firm which makes networking equipment, has a contract with Huawei that represents 44% of its entire revenue.

On Monday, the US Commerce Department issued a temporary licence that enabled some companies to continue supporting existing networks and devices - but longer term, it’s an unstable, unpredictable future for the cooperation between American and Chinese innovators.

Analysts predict the decision could encourage China’s desire to build more technology within its own borders. That would be a difficult, costly, and in some areas sub-par, move to take. But long-term it would give China a chance to set its own standards on future technologies.

That would hasten what some are referring to as the Balkanisation of the digital age: two separate internets that would each require different technologies in order to use them.

Why most people wont buy an electric car
Previous Item
NEXT