"Ten phones, two laptops, digital cameras... all just sitting here. We're not dealing with it." Louise Lewis is surveying a collection of old gadgets that have piled up in her home.

Her technological stash, experts say, is typical. But it could jeopardise our ability to manufacture new devices.

A study has estimated that as many as 40 million unused gadgets are languishing in UK homes.

The growing, unseen shortage of "rare earth elements" was the impetus for the Royal Society of Chemistry's survey of just how much unused technology we are all stockpiling.

The organisation carried out an online survey - completed by more than 2,000 people - which revealed that half of UK households had at least one unused electronic device and 45% of homes had between two and five. Most people admitted they had no plans to recycle their collection.

What elements could we run out of?

"There are about 30 different elements just in a smartphone," said Elisabeth Ratcliffe from the Royal Society of Chemistry, "and many of them are very rare."

The metal indium, she explained, is used in a unique compound called indium tin oxide, which is vital for touch screens, because it conducts electricity and is transparent. "It's also used in solar panels, so we're going to need a lot of it in the future.

"There's not a lot of it in the Earth and you need a kilo of ore to extract just a few milligrams of indium."

Most of us will not have heard of tantalum, but it's a highly corrosion-resistant metal that is "perfect for small electronic devices like our phones", explained Ms Ratcliffe. "But it's also perfect for hearing aids and pace-makers," she told BBC News.

Scientists estimate that indium and tantalum mines, among others, could run out within a century. Meanwhile, our demand for new technology continues to increase.

"Even the copper in all that wire is not endlessly abundant," added Ms Ratcliffe. "On top of that, most of these devices are coated in plastic, which could be recycled." 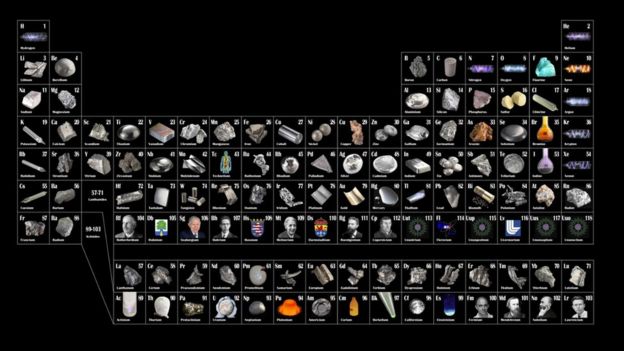 2019 is the international year of the periodic table

So what should I do with my old tech?

In short - recycle it; you can search for your nearest electronics recycling point online.

"Take it to your local tip," advised Stuart Price from Electrical Waste Recycling in Huddersfield. "Or a retailer - distributors actually have an obligation to take back material when you buy a new product from them."

"We need this material to go to reprocessing facilities, so it can be processed properly." 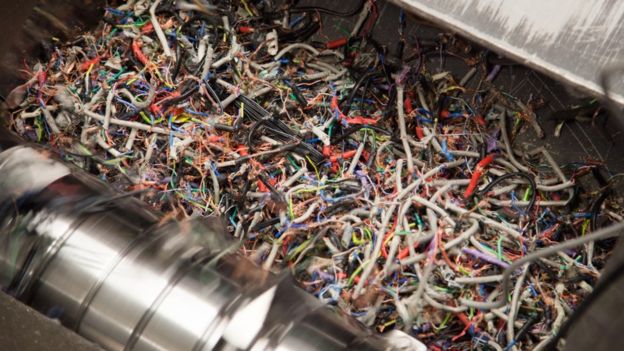 At electrical waste reprocessing plants, devices - even wires- can be broken down into their component parts for recycling

Many people who hoard old tech are concerned about protecting their personal data, but a "factory reset" should protect that - and council tips and responsible retailers keep electronics secure before they are recycled.

According to the Electrical Waste Recycling Group, about 500,000 tonnes of electronic waste is recycled in the UK every year. But that is only a fraction of the "E-waste" that is piling up in landfill and in people's homes.

Much of the responsibility for that will lie with tech manufacturers, according to Prof Lenny Koh, director of the Centre for Energy, Environment and Sustainability at the University of Sheffield.

"The current approach is not sustainable," she told BBC News. "With increasing demand and reliance on smaller devices and more sophisticated technology, there'll only be more waste to be recycled.

"Manufacturers need to think about the entire life-cycle of a device at the design stage - so devices are built to be fully recyclable."

Ms Ratcliffe added that we can all help by delaying a phone upgrade for a while longer. "This is the International Year of the Periodic Table," she said. "So it's a great time to be thinking about all the amazing elements out there. And just by holding onto your current phone for another year, you can really make a difference in environmental terms."