5G mobile networks are not ready for primetime

This was the year that 5G came to the UK, promising a new era of mobile communications. But how is it working out for those few consumers who have taken the plunge and signed up for a service?

I have conducted a not very scientific audit. My conclusion is that 5G is not ready for mainstream adoption yet.

The revolution began on 30 May when EE launched its 5G service in six cities. Vodafone swiftly followed, and then O2 switched on its service in mid-October.

Three's 5G service is not yet available for mobile phones, but it offers a home broadband service in parts of London.

To get these services, you need a 5G phone or one of Three's home broadband routers, so I borrowed equipment from all four networks and started my programme of testing.

5G promises to revolutionise the way we communicate, connecting all sorts of things - cars, lamp-posts, maybe even products on a supermarket shelf - as well as people to the internet, at lightning speeds.

But the vision of smart cities in which data flows seamlessly, creating all sorts of exciting services, is some way off.

In the short-term, the operators have to persuade consumers that it is worth trading up to 5G. For now, the big selling points are speed and a lack of congestion.

Even if you have a 4G phone, which gets a good signal in most places, you'll have experienced that moment when you travel through a major railway station or to a football stadium, and the coverage just evaporates.

5G should provide ultra-fast downloads - well above 100 megabits per second (Mbps) and as high as one gigabit per second (Gbps) - even in busy places.

Streaming 4K ultra-high resolution videos or playing an online video game against friends should be simple.

But even though I was testing the three phones in central London - one of the few places you might expect to get solid 5G - the results were disappointing.

The first shock came with the 5G handset I picked up from Vodafone in Southwark. I was shown one of the 5G masts on the building's roof and a first speed test showed a lightning-fast 700 Mbps.

It seems that the 5G masts involved had quite a short range. And while there are bigger masts available to operators, and talk of using lower radio frequencies in the future to help boost distances, none of this helped me as a consumer using the service today.

As I acquired 5G handsets from EE and O2, I roamed London from Ealing in the west via Paddington Station, to Oxford Circus, Waterloo and then Bermondsey in the south-east, conducting speed tests.

It was rare for me to get 5G speeds on more than one device, and in two locations - Paddington Station and Bermondsey - none of them achieved it. In fact, at Paddington, just the kind of busy location where the new technology is supposed to come into its own, one phone barely reached 5Mbps, while the two others recorded a speed below 1Mbps.

Overall, EE performed best, followed by Vodafone and then O2 a distant third - though its one success saw it soar above 250Mbps on the Hungerford Bridge, near Waterloo.

The best results were on the EE Samsung Galaxy S10 in my home in Ealing, where the phone regularly achieved speeds as high as 700Mbps.

Three claims to have an advantage against its rivals because it currently has more 5G spectrum. So how did it perform?

My house is outside the area covered by its 5G home broadband service, so we installed the necessary piece of kit - a router made by the controversial Chinese firm Huawei - in my son's flat in Bermondsey. 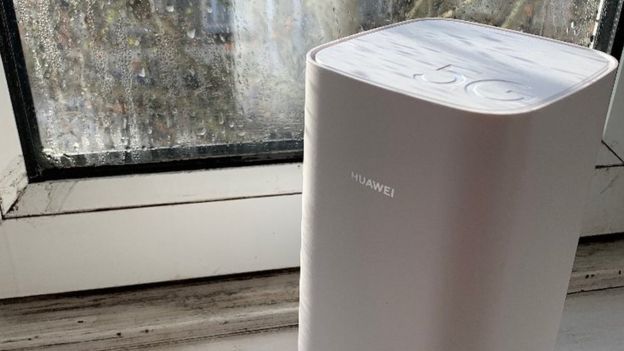 A 5G Huawei router was used to test Three's network

This is right on the fringe of the Three 5G network and when I went round to test, the speeds were unimpressive, somewhere in the mid-20s. As my son pointed out, that was never going to be a replacement for his fixed-line fibre broadband connection.

Mind you, the next day he phoned with better news - his latest test had shown a speed of 110Mbps.

My overall conclusion is that people signing up to 5G are likely to be disappointed in the short-term, finding that it just isn't available, even in many parts of the cities where it has been switched on.

My testing was pretty unscientific but the consultancy Rootmetrics reached similar conclusions. Its much more rigorous research compared EE and Vodafone services in London, Birmingham and Cardiff - its tests have not so far covered the newly arrived O2 network.

Unsurprisingly, Rootmetrics found that 5G outperformed 4G, but EE's service was available only in 60% of the capital, and for Vodafone the figure was just 21%.

I put it to mobile phone analyst and enthusiast Ben Wood of CCS Insight that you would be bonkers to sign up to 5G right now.

He agreed that the rollout was going more slowly than anticipated. He said planning decisions were being held up because of health fears, which he described as being "spurious".

"If you're expecting to buy a 5G phone and walk out of a store and use 5G everywhere, that is absolutely not the case today," he acknowledged. 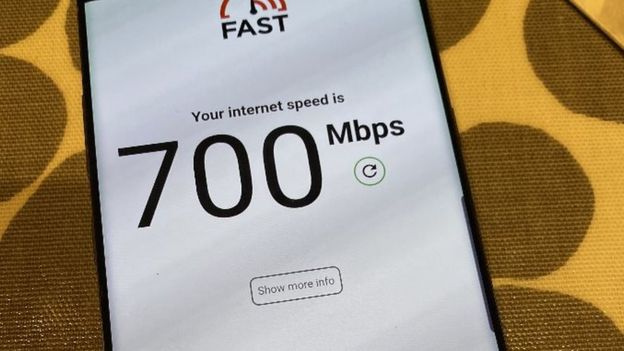 This was the best result achieved in Rory's home

But he insists it should be seen as a long-term investment.

"Most people in the UK now keep their smartphones, which cost hundreds and hundreds of pounds, for at least three years or maybe more.

"Not buying a 5G phone today would be akin to buying a TV over a decade ago that wasn't HD ready - you're buying something which is potentially obsolete within the lifetime of the device."

It is clear that all the networks need to invest a lot more money in infrastructure, and that far more 5G handsets need to become available before the new technology goes mainstream.

Across the mobile industry all eyes are on Apple, expected to unveil a 5G iPhone in September 2020. If that does not happen, this revolution could be postponed once again.