A new social media filter has been launched to prevent users from receiving unsolicited naked pictures.

On Friday the plugin - called Safe DM - which blocks and deletes pictures of penises sent via direct message became available to Twitter users.

Developer Kelsey Bressler came up with the idea after she received an unwanted nude picture from a man.

Safe DM is in the early stages of talks to add the filter to another major platform, Ms Bressler told the BBC.

"We would like to roll this out on other social media platforms and are discussing where to go next."

To develop the artificial intelligence, Ms Bressler put out a request in September for the public to send her pictures of penises.

"I am testing a filter that is under development which will automatically detect dick pics in DMs and handle them on behalf of the user," she posted on Twitter. 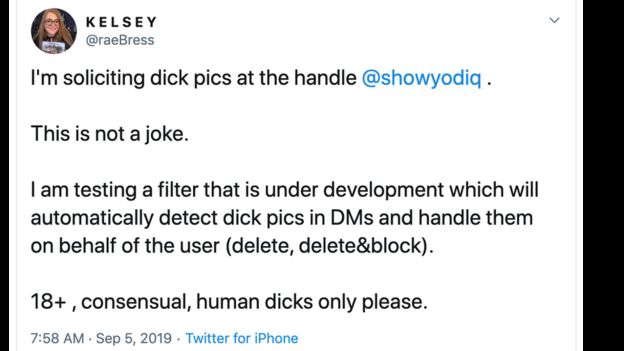 The Safe DM team claims the filter works 99% of the time.

A test by Buzzfeed News concluded the software was highly accurate when it came to blocking and deleting pictures of penises. But there is a lag time of several minutes.

The software scans users' messages for images of penises. If it detects one it sends a reply to both parties letting them know the message was inappropriate and has been deleted.

Ms Bressler said the AI only looks for the unwanted images and does not read the text of a message.

Last year, Ms Bressler spoke to the BBC about the development of the project.

She said receiving an unsolicited nude image was the "virtual equivalent of flashing someone in the street."

"You're not giving them a chance to consent, you are forcing the image on them, and that is never okay."

A Pew Research Study from 2017 found 53% of women between the ages of 18 and 29 had received an unsolicited lewd image.

Datacentrix is SD-WAN partner of the Year

Facebook warns of risks to innovation
Previous Item
NEXT

Apple might use its own 5G antenna
Next Item