Coronavirus: India's race to build a low-cost ventilator to save Covid-19 patients

India has an estimated 48,000 ventilators and most of them are already in use

In an 8,000 sq ft (743 sq m) facility in the western Indian city of Pune, a bunch of young engineers are racing against time to develop a low-cost ventilator that could save thousands of lives if the coronavirus pandemic overwhelms the country's hospitals.

These engineers - from some of India's top engineering schools - belong to a barely two-year-old start-up which makes water-less robots that clean solar plants.

Last year, Nocca Robotics had a modest turnover of 2.7 million rupees ($36,000; £29,000). The average age of the mechanical, electronic and aerospace engineers who work for the firm is 26.

India, by most estimates, only has 48,000 ventilators. Nobody quite knows how many of these breathing assistance machines are working. But it is a fair assumption that all those available are being used in intensive care units on existing patients with other diseases.

About one in six people with Covid-19 gets seriously ill, which can include breathing difficulties. The country faces seeing its hospitals hobbled as others around the world have been, with doctors forced to choose who they try to save.

At least two Indian companies make ventilators at present, mostly from imported components. They cost around 150,000 ($1,987; £1,612) rupees each. One of them, AgVa Healthcare, plans to make 20,000 in a month's time. India has also ordered 10,000 from China, but that will meet just a fraction of the potential demand.

The invasive ventilator being developed by the engineers at Nocca Robotics will cost 50,000 rupees ($662). Within five days of beginning work, a group of seven engineers at the start-up have three prototypes of a portable machine ready.

They are being tested on artificial lungs, a prosthetic device that provides oxygen and removes carbon dioxide from the blood. By 7 April, they plan to be ready with machines that can be tested on patients after approvals. 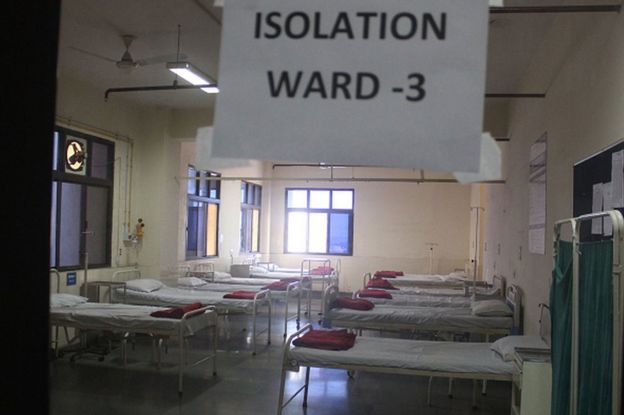 India is beefing up isolation beds in hospitals

"It is most certainly doable," said Dr Deepak Padmanabhan, a cardiologist at Bangalore's Jayadeva Institute of Cardiovascular Sciences and Research, and a key advisor on this project. "The simulations on artificial lungs have been done and seem to work well."

The race to develop this inexpensive, home-grown invasive breathing machine is an inspiring story of swift coordination and speedy action involving public and private institutions, something not common in India.

"The pandemic has brought us all together in ways I could never imagine," says Amitabha Bandyopadhyay, a professor of biological sciences and bioengineering at Indian Institute of Technology (IIT), Kanpur, and a key mover of the project.

The young engineers mined open source medical supplies groups on the internet to find information on how to make the ventilators. After securing permissions, it took them exactly eight hours to produce the first prototype. Of particular use, say doctors, were some designs by engineers at MIT. With imports stalled, the engineers picked up pressure sensors - a key component of the machine that helps supply oxygen to lungs at a pressure that doesn't cause injury - from those used in drones and available in the market. 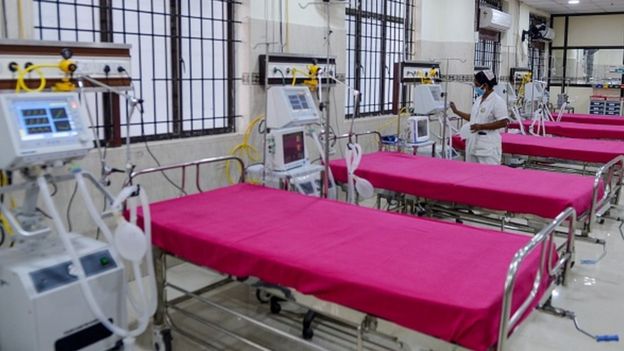 Local authorities helped open firms that stock components - each machine needs 150 to 200 parts - and made sure that a bunch of engineers who had returned home to Nanded after the lockdown were still able to travel 400km (248 miles) back to Pune to work on the machine.

Some leading Indian industrialists, including a major medical device-making company, have offered their factories to manufacture the machines. The plan is to make 30,000 ventilators, at around 150-200 a day, by the middle of May.

Social media influencers joined the effort. Rahul Raj, a lithium battery-maker and an IIT alumnus, crowd-sourced a group called Caring Indians to "pool resources and experience" to cope with the pandemic. Within 24 hours, 1,000 people had signed up. "We tweeted to the local lawmaker and local police in Pune to help the developers, and made contacts with people who would be interested in the project," Mr Raj said.

Expat Indian doctors and entrepreneurs who went to the same school - IIT is India's leading engineering school and alumni include Google chief Sundar Pichai - held Zoom meetings with the young developers, advising them and asking questions about the machine's development. The head of a US-based company gave them a 90-minute lecture on how to manage production. A former chief of an info-tech company told them how to source the components.

Lastly, a bunch of doctors vetted every development and asked hard questions. In the end, more than a dozen top professionals - pulmonologists, cardiologists, scientists, innovators, venture capitalists - have guided the young team.

Doctors say the goal is to develop a "no-frills" breathing machine tailored to Indian conditions.

Ventilators depend on pressurised oxygen supply from hospital plants. But in a country where piped oxygen is not available in many small towns and villages, developers are seeing whether they can also make the machine run on oxygen cylinders. "In a way we are trying to de-modernise the machine to what it was barely 20 years ago," says Dr Padmanabhan.

"We are not experienced. But we are very good at making products easily. The robots that we make are much more complex to make. But this is a life-saving machine and carries risk, so we have to be very, very careful that we develop a perfect product which clears all approvals," said Nikhil Kurele, the 26-year-old co-founder and chief executive officer of Nocca Robotics.

In just a week's time, India will learn whether they pulled off the feat. 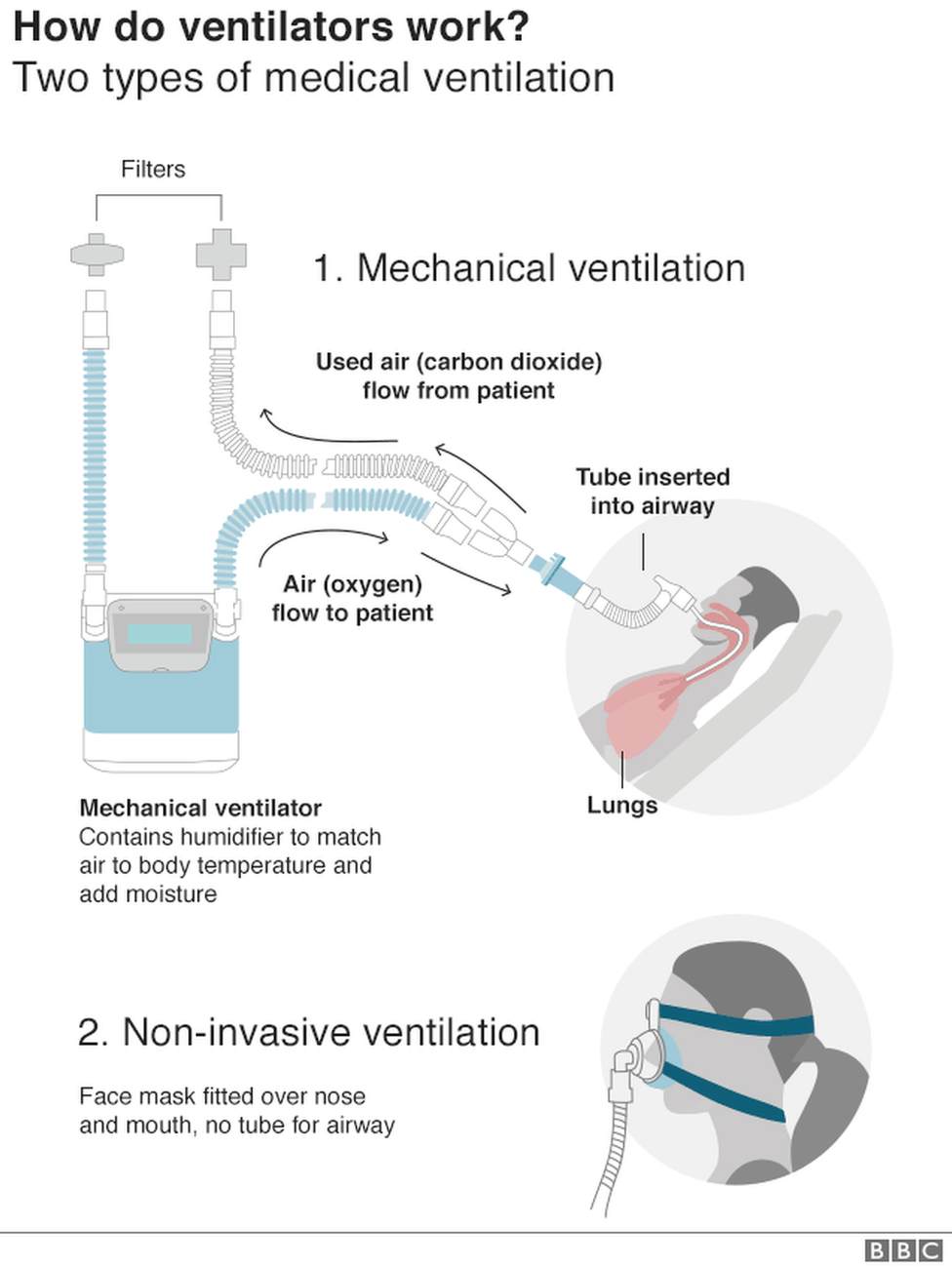