A rubbish story: China's mega-dump full 25 years ahead of schedule

China's largest dump is already full - 25 years ahead of schedule.

The Jiangcungou landfill in Shaanxi Province, which is the size of around 100 football fields, was designed to take 2,500 tonnes of rubbish per day.

But instead it received 10,000 tonnes of waste per day - the most of any landfill site in China.

China is one of the world's biggest polluters, and has been struggling for years with the rubbish its 1.4 billion citizens generate.

How big is the landfill site?

The Jiangcungou landfill in Xi'an city was built in 1994 and was designed to last until 2044.

The landfill serves over 8 million citizens. It spans an area of almost 700,000 square metres, with a depth of 150 metres and a storage capacity of more than 34 million cubic metres.

Until recently, Xi'an was one of the few cities in China that solely relied on landfill to dispose of household waste - leading to capacity being reached early.

Earlier this month, a new incineration plant was opened, and at least four more are expected to open by 2020. Together, they are expected to be able to process 12,750 tonnes of rubbish per day.

The move is part of a national plan to reduce the number of landfills, and instead use other waste disposal methods like incineration.

The landfill site in Xi'an will eventually become an "ecological park".

Where does China's rubbish end up?

How much waste does China produce?

In 2017, China collected 215 million tonnes of urban household waste, according to the country's statistical yearbook. That's up from 152 million ten years earlier.

The country had 654 landfill sites and 286 incineration plants.

It is not clear what China's recycling rate is, as no figures have been released. China plans to recycle 35% of waste in major cities by the end of 2020, according to one government report.

This July, sorting and recycling rubbish was made mandatory in Shanghai - leading to "a sense of panic" among some residents.

In 2015, there was a landslide at a rubbish dump in the southern city of Shenzhen, killing 73 people.

The dump was designed to hold four million cubic metres worth of rubbish, with a maximum height of 95 metres.

When it collapsed, it was holding 5.8m cubic metres of material with waste heaps up to 160m high. 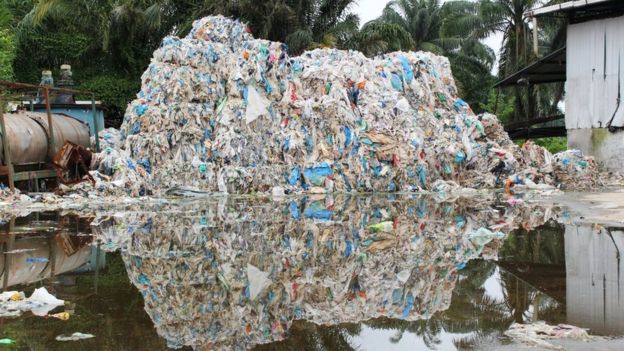 One town in Malaysia was left swamped with foreign waste

Does China deal with other countries' waste?

Not anymore. It used to, until the end of 2017 when it decided to ban the import of 24 different grades of rubbish.

Other countries, including Malaysia, Turkey, the Philippines and Indonesia, have picked up some of the slack.

But they struggled to deal with the amount of waste coming in - often times resulting in massive, out-of-control landfills in their own countries.

Some of these countries have now banned the import of certain types of rubbish and are even sending it back.

LPG to pay GHc200.00 to every Ghanaian child

Do Chinese drones pose a threat to US?

Nile mega dam to be filled 'within 7 years'

Roberts not giving up on Wales career