It was a day when good runs and bad came to an end, while one player netted his 200th goal and another forgot who he was.

The Championship enjoyed a new name at its summit and some managers reminded their former clubs what they were missing.

Here's our pick of the things you might have missed from Saturday's Football League happenings.

Blades carve their way to the top

Leeds United's recent dip in form has led to a bit of a traffic jam at the head of the Championship and Sheffield United are the latest team to move to the front of the queue.

The first week in October is, many folk in football always tend to suggest, the time of the season to start looking at league tables.

And it makes pretty good reading for the Blades as their fairytale story under Chris Wilder continues.

The job Wilder - an unashamed lifelong United fan - has done at Bramall Lane often flies somewhat under the radar.

But after lifting the Blades out of the League One doldrums, Wilder is now threatening to put together a second straight tilt at the Championship play-offs.

David McGoldrick's penalty sent United to the summit and made it a miserable return to South Yorkshire for Hull boss Nigel Adkins, which brings us nicely to...

Shout out to my ex 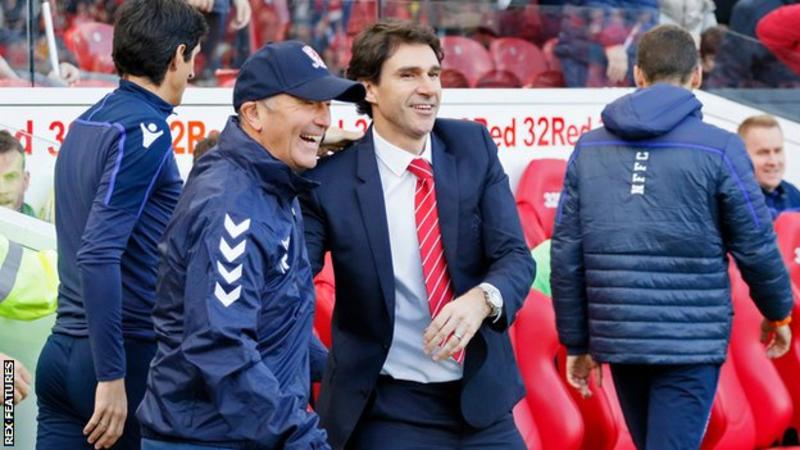 Don't worry, we're not getting a Little Mix-ed up - Saturday was very much a day when several EFL managers were reunited with their former loves.

Five games - three in the Championship and two in League Two - featured bosses coming up against their old clubs.

Only one of those - the aforementioned Adkins - suffered defeat on a day when erstwhile managers mostly made a point, or three, against their former sides.

Aitor Karanka proved he's still really quite the man as, having once took Boro all the way up, he scoffed in the face of the notion that he could never, never bring them down.

A 2-0 win - the first goals Boro have conceded at home in the league this season - gave Karanka some closure, and propelled Forest into the top six.

Steve McClaren's QPR came from behind to claim a point against his former Derby charges while there were two thrillers in League Two involving ex-gaffers.

Only Nicky Maynard's stoppage-time equaliser denied Mansfield boss David Flitcroft a win as his return to Bury ended in a 2-2 draw but John Sheridan's Carlisle cruised to a 3-1 win at his ex-club Oldham.

Carlisle's win was a pretty impressive one given they had a player suffering from an apparent identity crisis... 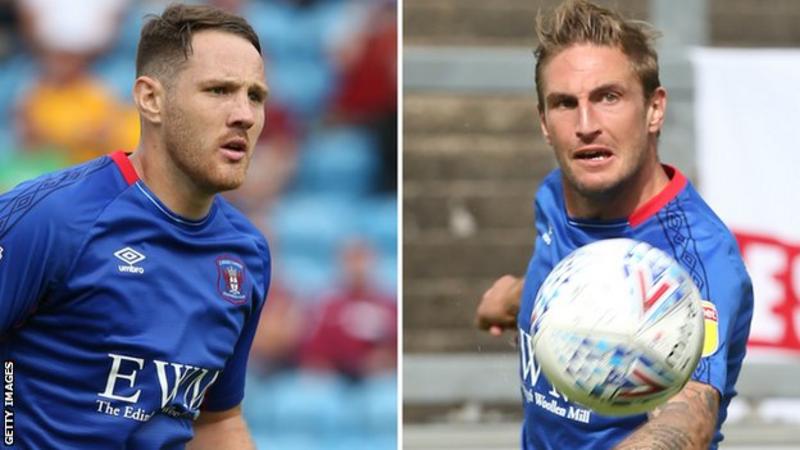 Now we've all seen The Wrong Trousers but there was a possible sequel, The Wrong Shirt, at Boundary Park on Saturday afternoon.

Quite how Carlisle's veteran midfielder Gary Liddle managed to emerge from the tunnel with the wrong top on is a mystery.

Even more puzzling is that not only did Liddle (who wears number 4 usually) have Tom Parkes' number 6 jersey on - but defender Parkes was wearing his own shirt too.

As anyone who has ever enjoyed a dressing room tour knows, footballers' shirts are hung back to front on players' pegs, with name and number clearly visible to all.

Fortunately, the eagle-eyed fourth official spotted the oversight five minutes into the game, rescuing fans, journalists and most importantly, the referee, from a potentially embarrassing case of mistaken identity.

One would like to hope that the Cumbrians' travelling contingent broke into a chorus of 'There's Only Two Tom Parkes, Two Tom Parkes' when the error came to light. 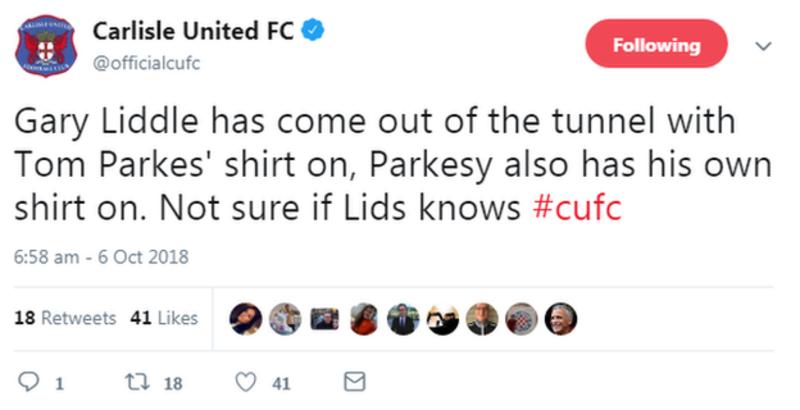 Unbeaten two months into the season - and sixth

How can you be unbeaten two months into the season and yet barely scraping into the play-off positions?

When you are draw specialists Forest Green.

Mark Cooper's side are yet to taste defeat in 90 minutes this season - even their Carabao Cup exit at Wycombe came on penalties - but they are not winning many either.

Saturday's 1-1 draw at home to Newport County was the eighth time in 12 League Two games that the Green Devils have shared the spoils.

But they had Newport's Mickey Demetriou to thank for extending their undefeated sequence as the County man blazed over a second-half penalty.

Rovers - who admittedly hit the woodwork twice in the first half - are now the only unbeaten side in the EFL's three divisions after League One leaders Portsmouth were stunned 2-0 at home by struggling Gillingham.

And only one team in the EFL remains without a win after Ipswich's 3-2 Championship triumph at Swansea City and Plymouth's 1-0 League One win over Wimbledon.

That dubious honour belongs to the side sitting bottom of the entire league, Macclesfield Town, whose 1-0 loss at home to Notts County leaves them five points off safety. 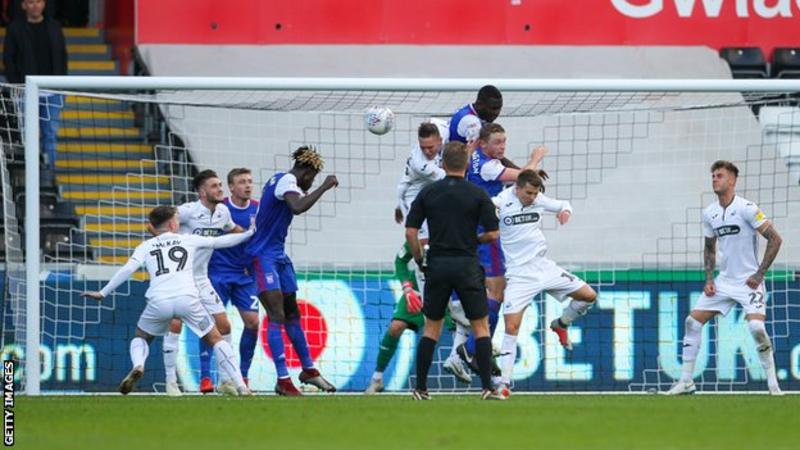 Milestone for 'The Beast'

There's not much left to write that hasn't already been written about Wycombe's uniquely-built striker Adebayo Akinfenwa.

Actually, here's something that's not been written before - the burly forward has now scored 200 career goals.

He reached the landmark with Wanderers' second goal in the 2-1 League One win over Burton Albion, somewhat overshadowing Joe Jacobson's opener from the penalty spot on what, coincidentally, was the full-back's 200th Chairboys appearance.

Also worthy of a scoring shout-out is Charlton's Lyle Taylor, who has scored twice in two games since dying his hair pink in aid of charity after bagging the opening goal in Athletic's 2-1 home defeat by Coventry City.

And there was a first career hat-trick for Birmingham's Lukas Jutkiewicz as Blues beat Rotherham 3-1 in the Championship. The 29-year-old is up to 79 career goals now - if he follows the fitness regime that has kept Akinfenwa still knocking in the goals at 36, Jutkiewicz should be a shoo-in to reach the 200-goal mark as well... 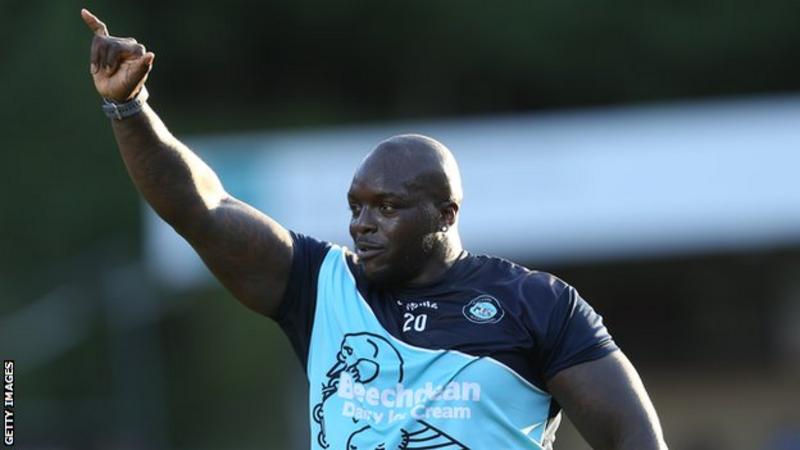 The majority of Adebayo Akinfenwa's 200 career goals have come in League One and League Two with Wycombe, Gillingham, AFC Wimbledon and Northampton

Biggar to leave Northampton at end of season

The 21st Century babies breaking through...
Next Item