Atletico have never lost a match in which Saul Niguez has scored - played 37, won 33, drawn 4

Liverpool's defence of their Champions League title hangs in the balance after Saul Niguez's early strike gave Atletico Madrid an aggregate lead going into the second leg of their last-16 tie at Anfield.

The Reds were given a dose of their own medicine as Atletico harried and hassled throughout, limiting them to just two clear chances and no shots on target.

Klopp replaced Sadio Mane and Salah with Divock Origi and Alex Oxlade-Chamberlain but neither made an impact.

Two-time finalists Atletico, who have been on a poor run of form, held on to a fourth-minute lead given to them by Saul. The Spanish midfielder turned sharply to fire home after a corner came off the boot of Fabinho.

The return leg is on Wednesday, 11 March. 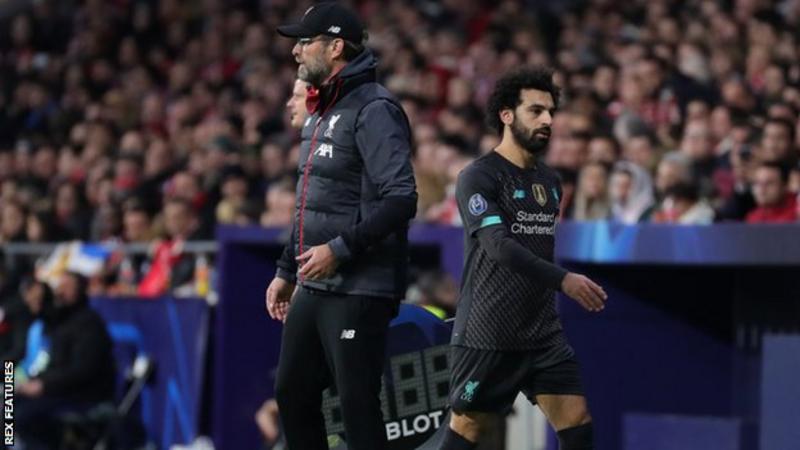 Minutes before kick-off Klopp referred to Atletico having a similar "intense DNA" to his own side - and unfortunately for him they were at their intense best.

What faced the Reds was almost a mirror image - a team that relentlessly pressed and got numbers forward on the counter.

The Reds had large spells of possession in the opposition half, but Diego Simeone's Atletico side are past masters at dealing with teams of that type. They forced Liverpool into several errors when they had possession, and limited them to only two clear chances on goal.

In fact, Liverpool had to wait until the 53rd minute for their first opening - Salah's stooping header drifting comfortably wide.

The German coach, obviously not happy with his attacking threat in the first half, had twisted at half-time when he brought on Origi for the under-par Mane.

However, the Belgium striker - the hero of last year's final - was easily marshalled, bar one moment of quality when he hooked in a cross for captain Henderson, who fired wide.

Klopp's skipper came off injured in the 80th minute to cap a forgettable night.

Liverpool have it in them to turn this tie around at Anfield, but unlike Barcelona in last year's semi-final, Simeone's Atletico will be a tougher nut to crack. Klopp men's will have to be at their very best in three weeks. 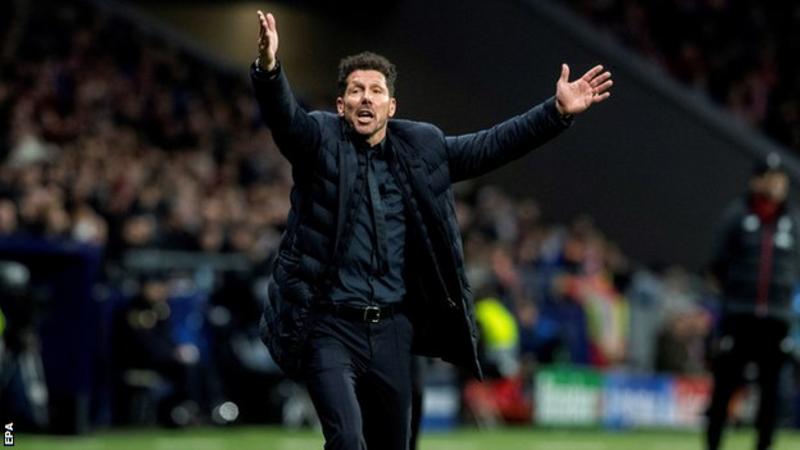 Los Rojiblancos - the Red and Whites - needed this performance.

This competition remains, realistically, their only hope of silverware this season following a recent rotten period which saw their two other chances - La Liga and Copa del Rey - effectively extinguished.

Against the Reds, they produced the sort of display spectators have become accustomed to from a Simeone side - tenacious and disciplined.

The Argentine boss is still in the process of restructuring his defence after revered stalwarts Juanfran, Diego Godin and Filipe Luis ended their time at the club last season. But the display of the back four on Tuesday will have made his task simpler.

Full-backs Sime Vrsaljko and Renan Lodi stayed focused as they quelled the threat of their Liverpool counterparts, while the more experienced Stefan Savic and Felipe were immovable barriers as they dealt with Roberto Firmino, Salah and Mane.

Midfielder Thomas Partey added vital support to the home backline in what was an exceptional defensive display.

At the other end, had Diego Costa been on the pitch to meet a cross rather than Alvaro Morata, then perhaps the Spanish side would have taken the lead inside the first three minutes.

However, they made the most of their early sorties when Saul turned in thanks to Fabinho's misfortune.

Simeone, dressed again in all black, was his fidgety and animated self on the touchline - barking orders and occasionally rousing the home crowd inside the Wanda Metropolitano.

Atletico will need his influence, and more of the same from the team at Anfield, if they are to record one of their best results in recent years. 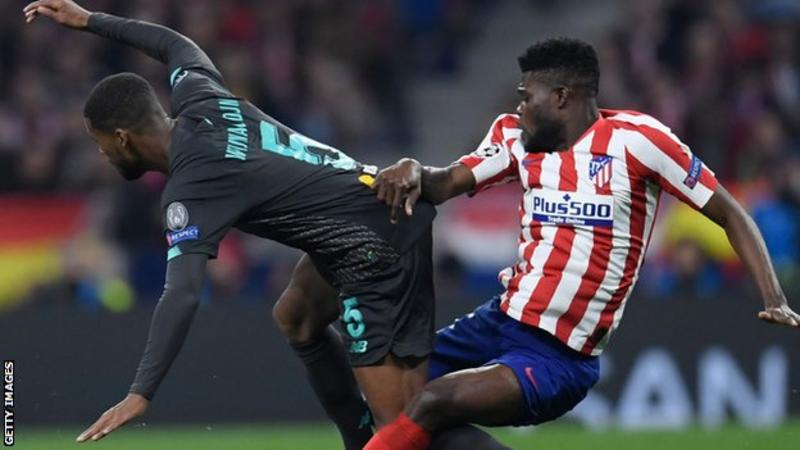 'Emotions were on the side of Atletico' - reaction

Liverpool manager Jurgen Klopp: "I had no problem with the result. I saw so many happy faces from Atletico tonight, I get that because it's a big win, but it's not over yet. That's the only thing I feel.

"The crowd wanted to help their team tonight. That makes it a very emotional game.

"Emotions are important. Tonight they were obviously completely on the side of Atletico but I am really looking forward to the second leg."

Atletico boss Diego Simeone: "The best side in the world came here and we beat them.

"But it's only one game down, one to go. Liverpool had their chances. They were dangerous, they've got good players all over the pitch."

How green are Premier League clubs?

Why Plange is the next big thing in Gh boxing