The Duchess of Sussex's old TV show Suits has made a cheeky quip about her new role as a royal.

Meghan shot to fame as lawyer Rachel Zane in the hit US legal drama, starring from its launch in 2011 until her final episode in 2018.

Rachel's on-screen husband Mike Ross, played by Patrick J Adams, also left, but returned for an episode of the new series and was asked how she's doing.

"If I told you how good, you probably wouldn't believe me," he replied.

Fans of Suits seemed to love the reference.

In the show, Mike and Rachel were seen getting married before the characters moved to Seattle.

Adams was among the Suits stars at the royal wedding last May, when Meghan married the Duke of Sussex at Windsor Castle.

Meghan announced she was quitting the USA Network drama shortly after getting engaged, in order to commit to royal engagements. 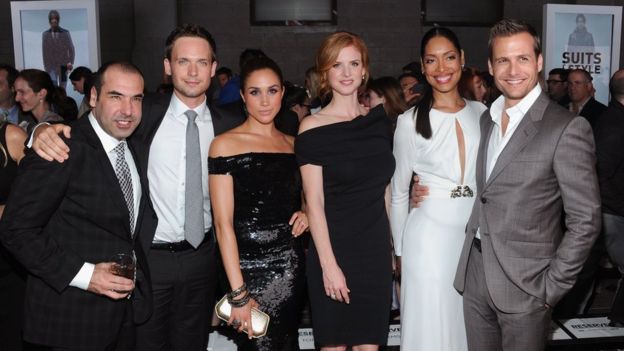 Meghan pictured with her Suits co-stars in 2012