Vice President Mahamudu Bawumia yesterday joined both serving military and ex-service men, members of the Diplomatic Corps, chiefs and a cross-section of Ghanaians to mark the 74th Remembrance Day at the Christianborg War Cemetery at Osu, Accra.

The day, which falls on November 11, each year, is set aside to remember Ghanaian soldiers and others who lost their lives in World Wars One and Two.

Since the end of the World War One, Remembrance Day has been observed by members of the Commonwealth to honour the officers and men in their respective Armed Forces who died in the line of duty.

The Armistice which ended World War One became effective at 11 a.m. on November 11, 1918, when the guns fell silent on the Western Front in France and Belgium, to bring the four years of hostilities to a close.

Armistice refers to the agreement made by opposing sides in a war to stop fighting for a certain period of time.

Ghana (then the Gold Coast) was part of the British Empire which sent men overseas to fight in the war, some of whom lost their lives.

After World War Two, Armistice Day was renamed Remembrance Day in memory of those who were killed in both world wars.

There were also the sounding of the last post, the observance of a two-minute silence and a reveille, a sound to wake up soldiers. 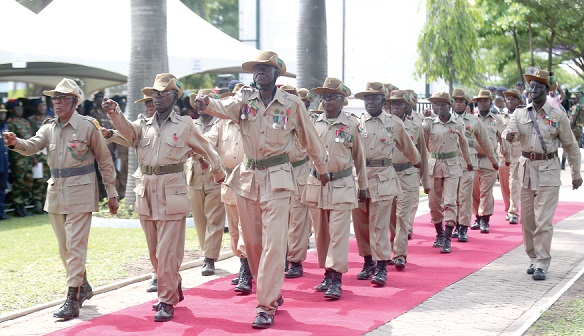 Some members of the Veterans Association of Ghana (VAG) marching to the grounds to mark the 74th Remembrance Day in Accra.

The Vice-President later laid a wreath on behalf of the government and the people of Ghana.

The British High Commissioner in Ghana, Mr Iain Walker, laid a wreath on behalf of the Commonwealth and Allied countries, while the Russian Ambassador to Ghana, who is the Dean of the Diplomatic Corps, Mr Dimitry Suslove, laid another on behalf of the diplomatic community.

The Chief of the Defence Staff, Lieutenant General Obed Boamah Akwa, also laid a wreath on behalf of the Ghana Armed Forces and other security agencies, while the Chairman of the Veterans Administration of Ghana, Major General C. B. Yaache (retd), laid one on behalf of veterans.

The Paramount Chief of the Osu Traditional Area and President of the Greater Accra Regional House of Chiefs, Nii Okwei Kinka Dowuona VI, also laid a wreath on behalf of the traditional authorities in the country.

Heads of Africa urged to invest in research

Fight against COVID on course – President

Ghana is fifth most 'visa-open' country
Previous Item
NEXT