Plans for the mine have drawn protests across Australia

Australia has given the final approval for construction to begin on a controversial coal mine to be built by Indian company Adani.

The mine, in Queensland's Galilee Basin, has been the subject of years of hold-ups over environmental approvals.

But it was given the go-ahead by the state government on Thursday, after earlier receiving federal approval.

Critics say the project's true impact remains unclear. Approval could pave the way for six more mines in the area.

Construction at the mine site could begin within days, but Adani must wait for additional approvals before it can begin extracting underground coal, for export to India and other countries in Asia.

Plans for the project, known as the Carmichael mine, were first proposed almost a decade ago. Initially, Adani said it would be one of the biggest in the world and employ 10,000 people.

But the mine has been scaled back significantly and it is now expected to create "1,500 direct and 6,750 indirect jobs", the company says.

The mine has frequently become a flashpoint for pro- and anti-coal forces, prompting protests and counter-protests. 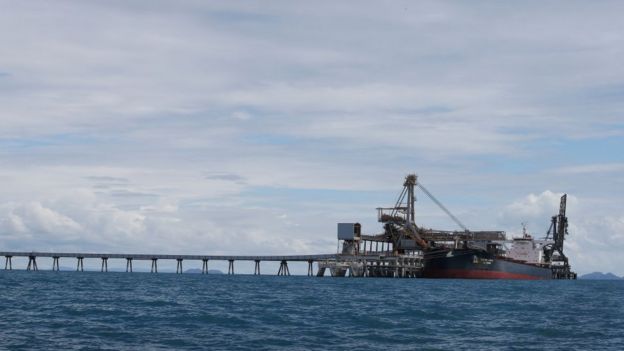 It was heavily debated before last month's general election. The poll returned Prime Minister Scott Morrison's government - a supporter of the mine - to power.

What has been approved?

The state also recently approved a separate plan to protect the black-throated finch, an endangered species which lives in the region. 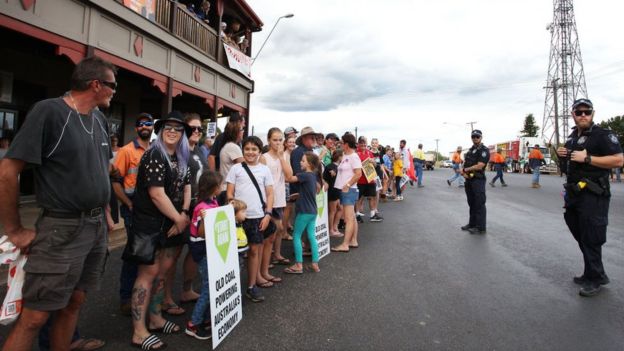 Though many oppose the mine, others - such as these demonstrators - say it will improve the economy

The company could extract up to 60 million tonnes of thermal coal annually but it initially plans to produce about 27.5 million tonnes, the Australian Broadcasting Corporation reported.

What do critics say?

Environmental campaigners fear it could pave the way for six other mines to be approved in the area, which is about 400km (248 miles) inland from the east coast.

The Carmichael site itself is barren land but those who oppose the mine say that activating it would still harm the fragile ecosystem of the nearby Great Barrier Reef.

"As custodians of the world's greatest coral reef system, Queensland and Australia has to lead by example and show there's a bright future for everybody that's beyond coal," said Shani Tager, a spokeswoman for the Australian Marine Conservation Society.

"Instead, they've approved a new fossil fuel project which will put more pressure on our reef."

Under the Paris climate agreement, Australia has pledged to cut emissions by 26% on 2005 levels by 2030.

However, the UN has warned that Australia is not on track to achieve its commitment.

The president’s son who loves Bugattis

Where will Kenya get more tax from?
Previous Item
NEXT

How is Ebola being treated on the ground?
Next Item