How is Ebola being treated on the ground?

As the death toll from the Ebola outbreak spirals and cases recorded outside its West African epicentre increase, concern is growing over the measures in place to contain the deadly virus.

But with the battle to tackle Ebola taking a heavy toll on the struggling health systems in affected countries, what is being done on the ground to treat those infected and stop the disease from spreading?

The treatment centre is designed to separate confirmed Ebola patients from probable or likely cases.

Upon entry, patients are examined by medical staff in full protective gear.

Following the initial diagnosis, they are then split into low or high probability wards until the laboratory results come in, which could take anything from a few hours to days, depending on the facility.

There is little that medical workers can do for their patients, as there is no cure for Ebola. All they can help with is to care for the patients and treat symptoms like dehydration, as well as wash and comfort them.

According to MSF, good care increases the chances of survival from a disease that has a 50% fatality rate and whose symptoms include vomiting, diarrhoea and bleeding, sometimes from the eyes and mouth. However, overcrowded facilities and a shortage of staff on the ground have made this difficult so far.

The equipment includes waterproof overalls, gloves, medical face masks and goggles. All parts of the clothing must be completely impermeable since Ebola is spread in bodily fluids such as sweat, urine and blood.

Medical staff are advised to wear the equipment for no longer than an hour at a time due to the high temperatures that can build up in the suit, as the BBC's Danny Savage explains.

Health workers face increased risks in the battle to combat Ebola, with more than 400 contracting Ebola since the onset of the outbreak. More than half of those infected, 232, died from the virus.

In July, Dr Sheik Umar Khan, who was leading Sierra Leone's fight against the epidemic, died of Ebola. The first case of contagion outside West Africa involved a Spanish nurse who had treated Ebola patients who had contracted the virus in Sierra Leone and Liberia.

The World Health Organisation (WHO) has said that there is still a significant lack of beds in Sierra Leone and Liberia, with 3,000 needed - and the number is expected to rise.

With patients being turned away from treatment centres because of the lack of beds and space, additional treatment centres are desperately needed. The UK is sending 750 military personnel to Sierra Leone to help deal with the deadly Ebola outbreak. The United States has pledged to build 18 Ebola treatment centres, as well as sending up to 3,000 troops.

Brigadier General Stephen McMahon, of the UK Ebola Task Force, explains how an 80-bed treatment unit is being built in Sierra Leone.

A group of 165 doctors, nurses and infection control specialists from Cuba arrived in Sierra Leone earlier this month and will spend six months helping local officials combat the epidemic.

The Cuban government will dispatch an additional 296 doctors and nurses to Liberia and Guinea after their training. 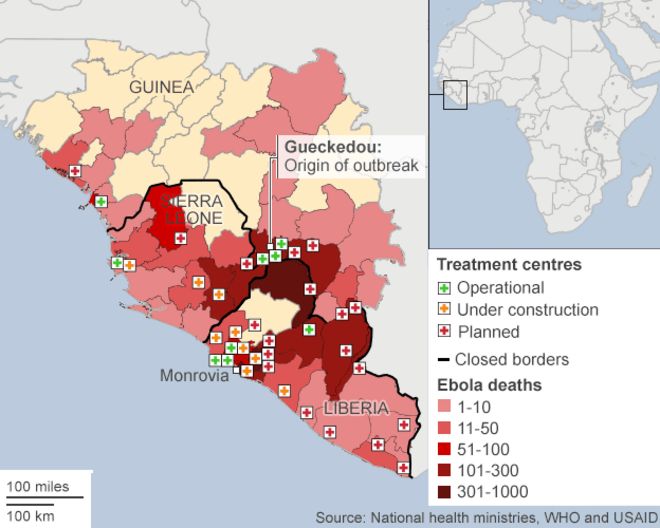 Rights to freedom are essential

Climate pledges will be tough to secure