What to look out for at Comic-Con 2019: Picard, Terminator, Batwoman and more

The new Terminator movie and the TV version of Philip Pullman's His Dark Materials will provide some of the big revelations at this year's Comic-Con.

Thousands of fans will gather later at the annual blockbuster TV and movie convention in San Diego, California.

Marvel Studios is expected to give fans an idea where the franchise is heading following Avengers: Endgame.

And the cast of Game of Thrones will reunite for the first time since that divisive final series.

Here are some of the major moments we can expect from the 50th edition of Comic-Con:

The return of Captain Jean-Luc Picard

It's been 14 years since Sir Patrick Stewart's last performance as the captain of the USS Enterprise, and details on his reprisal of the beloved character are scant.

A teaser trailer for the new Amazon Prime series Star Trek: Picard showed him seemingly on his family's vineyard in France as he is quizzed on why he left Starfleet.

"Fifteen years ago today, you led us out of the darkness," intones a woman's voiceover. "You commanded the greatest rescue armada in history. Then, the unimaginable. What did that cost you? Your faith? Your faith in us? Your faith in yourself?" 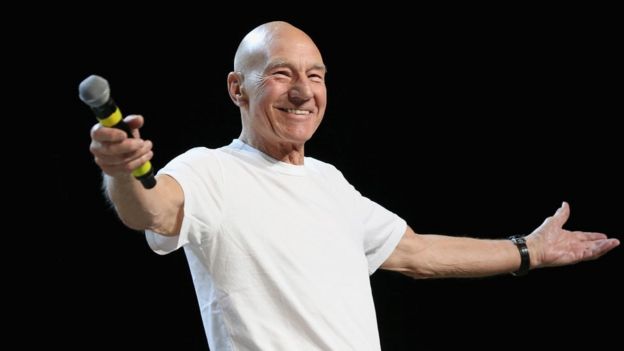 Speaking about his return, Sir Patrick - who was first cast in the role at the age of 47 and has just turned 79 - said it was a "difficult decision".

He told Yahoo Entertainment: "I loved being Picard and being on that series for seven years. It was a great experience with a wonderful cast and production team, but there have been so many proposals to have me in my uniform, or on this comedy, or other show that I've always said, 'No, I'm done'."

He admitted he only took the pitch meeting with Amazon to "seriously and respectfully explain to them why I was turning the project down".

A second crack at Philip Pullman's His Dark Materials

Hopes are high for this BBC and HBO joint production of Sir Philip Pullman's fantasy novels, set in a parallel universe in which people's souls, or daemons, take the shape of animals. It follows the adventures of Lyra Belacqua as she tries to solve the mystery behind a spate of missing children.

The new series' A-list cast includes Ruth Wilson, James McAvoy and Hamilton creator Lin-Manuel Miranda. It will also be a big introduction to TV audiences for 14-year-old British actress Dafne Keen, who comic movie fans will recognise as mutant Laura Kinney/X-23 from the 2017 film Logan. She stars as Lyra, first played by Anna Maxwell Martin in the National Theatre's stage adaptation in 2003.

Earlier this year, US channel The CW gave the world its first glimpse of Australian Orange is the New Black actress Ruby Rose in the trailer for Batwoman.

She plays Kate Kane, the cousin of Bruce Wayne and a highly-trained street fighter with a passion for social justice who protects Gotham as a vigilante. Batwoman (not to be confused with Batgirl) is also the first openly gay superhero.

Playing the world's first LGBTQ superhero "is amazing", says Rose, who is gay herself. "But [it] still [has] to be done in a way that's authentic and right, and feels good. 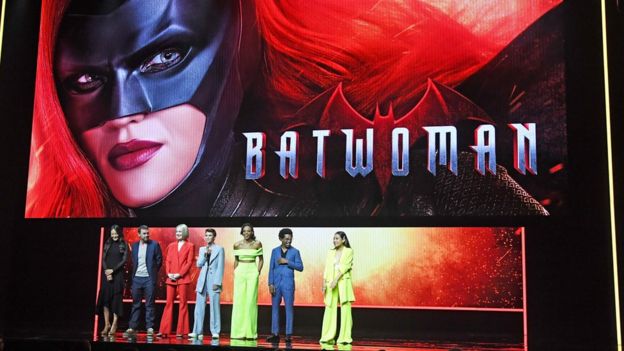 "The story they're telling me is so much more in-depth, real, grounded, heartbreaking and wild than what I anticipated."

The new series is set in the Arrowverse - which began with Arrow, based on the character Green Arrow, and which now includes fellow superheroes The Flash and Supergirl. It's due to premiere in the autumn.

Arnie said he'd be back, and 35 years after The Terminator first emerged on cinema screens, he's true to his word... again.

Terminator: Dark Fate is the sixth instalment in the franchise and the first since 1991's Terminator 2: Judgement Day to reunite creator James Cameron (here as a producer) and original cast members Schwarzenegger and Linda Hamilton as Sarah Connor.

It follows lukewarm critical and box office responses to three other Terminator films released since 2003, which have been described as occurring in alternate timelines. Which is a nice get-out when you have time travelling at your disposal as a plot device. 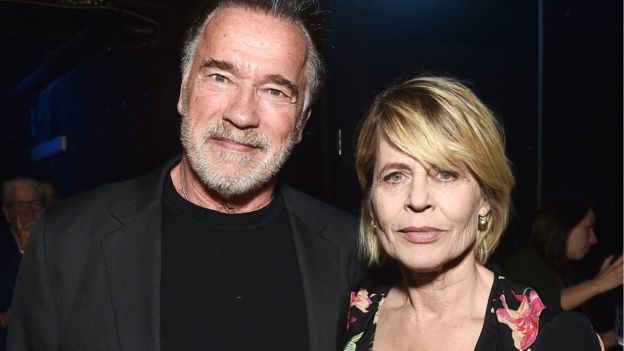 Dark Fate occurs 27 years after the events of Terminator 2, and Connor and the original (now grey, grizzled and bearded) Terminator come to the aid of a young woman and a hybrid cyborg human who are the targets of a new, modified liquid metal Terminator (Gabriel Luna) sent from the future by the word's most persistent computer Skynet.

Westworld... is no longer set in Westworld

Which should really kill off the concept of the show when you think about it. A bit like moving EastEnders "up the West End".

That said, following the robot uprising of the second series, the action has now moved away from the confined (but hardly cramped) quarters of Delos Inc's deadly theme park into the real world.

Soundtracked by Pink Floyd's classic Brain Damage form Dark Side of the Moon, the trailer reveals that Breaking Bad's Aaron "Duuude" Paul has also now joined the cast as a disaffected construction worker/bankrobber. 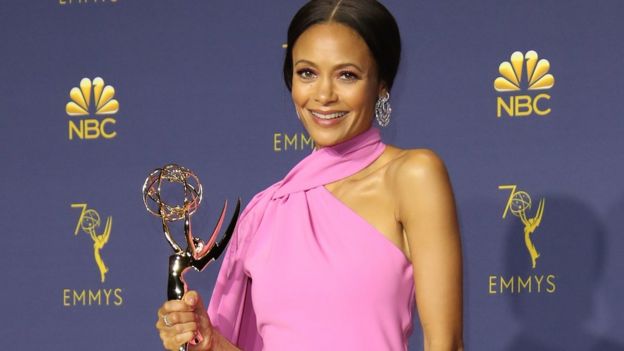 Series regular Evan Rachel Wood, who plays the escaped, now self-aware park host (robot) Dolores Abernathy, is briefly glimpsed towards the end of the trailer. There is no reference yet to other cast members like Thandie Newton - who won an Emmy for her portrayal of the tenacious host Maeve.

However, she and other actors Tessa Thompson, Wood, Paul and Jeffrey Wright are expected to give some insider information into the upcoming third season at Comic-Con.

OMG! The GOT cast are reuniting 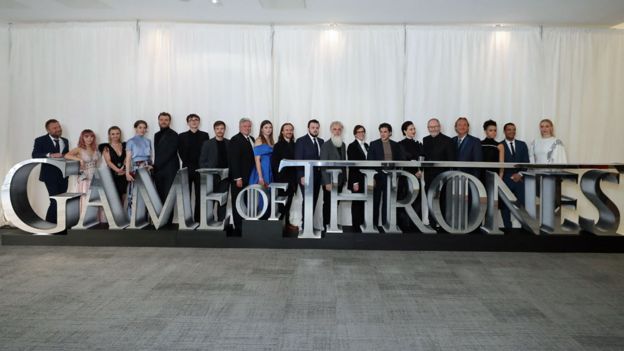 Such were the howls of scorn and disappointment hurled at series eight of Game of Thrones, the cast and crew deciding to reshoot the entire season with an ending fans will unanimously agree is the best ever...

...is not what is happening. At all. Despite a petition.

The series returns to Comic-Con for presumably the last time, with cast and showrunners answering questions about the closing chapter.

**Update: Game of Thrones official Twitter feed has now confirmed David Benioff and DB Weiss have pulled out of the panel discussion, as have actors Iain Glen (Jorah Mormont) and Nathalie Emmanuel(Missandei).** 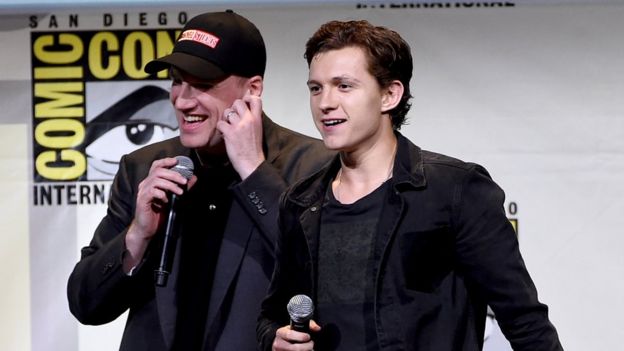 The blockbuster behemoth tends to loom large over Comic-Con, despite the latest phase coming to an end with Avengers: Endgame and Spider-Man: Homecoming.

Kevin Feige, the president and producer of Marvel Studios (pictured with Spider-Man star Tom Holland) will share his thoughts on everything Marvel past, present and future and could reveal their upcoming slate of movies post-Spider-Man: Far From Home.

Phase Four of the Marvel Cinematic Universe is rumoured to include Black Widow, Black Panther 2, Doctor Strange 2, Guardians of the Galaxy Vol 3 and the Ren & Stimpy crossover we have all been waiting for*.

This week, Marvel Entertainment tweeted: "Dawn of X. All Will Be Revealed." Although whether that means a reboot of X-Men, following Disney's acquisition of Fox, is unclear. The final film in the current X franchise, The New Mutants, has been slated for 2020.

How I lost my father - Obour writes

Sir Paul to write a 'wonderful' musical
Previous Item
NEXT

Gossip Girl gets reboot for new HBO service
Next Item