Newcastle Falcons' Johnny Williams: 'I never thought I would get cancer'

When Johnny Williams scored a try for England as they beat the Barbarians 51-43 at Twickenham in June, he was on top of the world.

He was in prime fitness and ready to kick on in the new season. The Newcastle Falcons centre may even have had a dream of making a late push into Eddie Jones' plans for the World Cup squad.

Fast-forward a few months and instead, the 23-year-old watched the action in Japan in a hospital bed as he had treatment for testicular cancer.

Williams had his final round of chemotherapy last month and now he hopes to return to rugby for the Falcons.

In his first interview since he went public with his illness, on the You, Me and the Big C podcast, Williams, who won the Under-20 World Cup with England in 2016, revealed how an athlete in peak physical condition came face-to-face with cancer.

'I never thought I would get it'

"It was definitely a shock," he said. "I had just finished pre-season and it was probably the fittest and strongest I had ever been.

"My last game was playing for England against the Baa-Baas in the summer, so I was on a huge high. Then I get this huge setback where I am then watching the World Cup in a hospital bed.

"Cancer was not in my mind. It has never been hereditary in my family.

"My only regret is that I let it go for three months because that might have been the difference between having chemotherapy and not. Instead of having just had surgery, I would be back playing now."

Williams had initially suspected a problem when he was in the bath and even went to see a GP. But with no "lumps or bumps" in the suspected area, everyday life got in the way and Williams carried on.

But a simple knock in training forced him to face up to his problem and take action.

"It wasn't a big, traumatic knock," he said. "This was really subtle and it was badly aching. It wasn't a direct blow, it's hard to explain.

"I was walking around the club for about an hour with this ache, thinking this is really bad. I was just thinking about this dull ache that I needed to get rid of, and that it was really serious.

"I then spoke to two of my closest mates, who passed me on our GP's number, and I rushed to his place and got it checked out. He asked me how long it had been like that for and he got me booked in for a scan straight away." 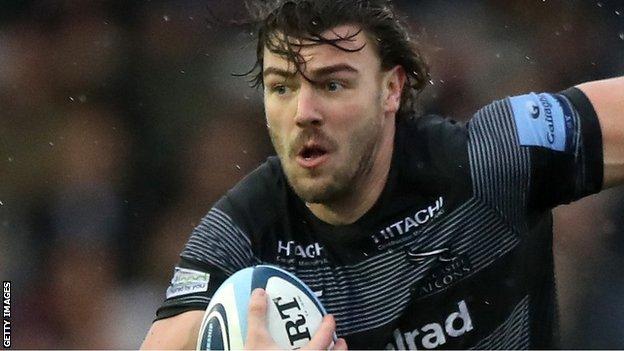 Williams joined Newcastle in May 2018

'Just get it checked out'

The Newcastle Falcons player, who used to share a house with England World Cup player Joe Cokanasiga during their days at London Irish, was told he had cancer and that he needed chemotherapy.

Williams had the last batch of that last month and he is waiting to start training again, with club physios estimating it will take him six weeks from then to get back up to speed.

As he talks about what has happened to him, his advice to other males is simple: If you suspect something is up, don't hesitate to find out what is wrong.

"You will never get laughed out of the GP surgery or the hospital or the nurse," he added. "It doesn't matter if there is something small, just get it checked out.

"I wish I had done something earlier because that may be the reason why I had chemotherapy. That could have been the difference between me back playing now and not."

But being forced to watch the World Cup in such a difficult manner is giving Williams the drive and motivation for when he is back on the rugby field.

The tournament in Japan has only just finished, but he already has eyes for France in 2023.

"While the World Cup was on, I felt like I was missing out, because that is my goal," he added.

Hudson-Odoi opens up on his Ghana roots

Nadal loses to Alexander Zverev in opener
Previous Item
NEXT